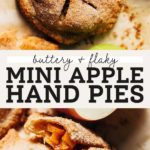 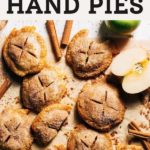 These apple hand pies taste JUST as delicious as homemade apple pie, without all the work. The filling is ready in 10 minutes using 6 simple ingredients, and the crust is made using store bought pie dough with a cinnamon sugar coating. In other words, they’re quick, easy, and ready in under an hour!

What makes these the BEST apple hand pies?

For starters, the flavor of these pies is so good that you would never even know they’re semi-homemade. The filling is perfectly spiced with tender apples and jammy texture, giving these pies a rich consistency just like a slice of apple pie.

They’re also very easy to make, especially compared to baking an entire apple pie from scratch. The filling comes together so fast, and the crust is made using store bought pie dough because sometimes we just need a shortcut! But to liven up the crust, an egg wash and cinnamon sugar are coated on the surface to give these pies a sweet and crunchy exterior.

Last but not least, they’re shaped like little apples! I took notes from my mini pumpkin pies and used a homemade apple stencil to cut out apple-shaped slices of pie dough. But you can also use an apple-shaped cookie cutter to make this recipe even easier.

How to make a quick and easy apple pie filling

The filling is made using only 6 ingredients and comes together in minutes. Here’s what you’ll need:

Everything is combined in a saucepan, minus the cornstarch, over medium heat. After about 10 minutes, the apples will tenderize and release their juices. The mixture will seem a bit runny, which is why the cornstarch comes in. This immediately thickens up the filling to give it a perfect jammy texture.

But before mixing it in, the cornstarch is combined with a bit of water. This is so the cornstarch can seamlessly blend with the apples. If it’s tossed in my itself, you’d be left with bits of cornstarch all throughout the filling which would not look or taste very appetizing.

How to shape these mini apple hand pies

After the filling is prepped, it’s time to cut out the tiny apples. For this recipe, we’re using store bought pie crust. One, because it’s just as good as homemade and two, because I wanted this recipe to be quick and easy. This time of year can get so busy, and sometimes you just don’t have time to bake everything from scratch!

To cut out our tiny apples, start by thawing the crust just a bit. It should be refrigerated, so allow it to rest at room temperature for about 15-20 minutes. This will make it easier to roll out and smooth for cutting.

For the apple shapes, you can either use an apple cookie cutter or make your own out of cardboard. For mine, I used the box that the pie crust came in. I made a rough outline of an apple that’s about 3.5″ wide by 3.75″ tall. Then I went back in and drew a harsher line as the true outline of the apple.

After cutting it out, just lay it on top of the rolled out crust and use a small paring knife to cut around it. Between the two crusts, you should get about 16 apples total.

CAN THESE APPLE HAND PIES BE MADE GLUTEN FREE?

If you can get your hands on a store bought gluten free crust, go for it! Otherwise, use my homemade gluten free pie crust used in my gluten free peanut butter and jelly pop tarts. My tip is to work with this dough when it’s close to room temp. If it’s too cold, it will break on you. Also use a spatula to help lift the apple cut outs, just to ensure they don’t crack!

Then, before baking, freeze the pies for about 10 minutes. This will firm up that butter again which will give you a delicious flaky crust. This dough also bakes at a lower temp, so bake the pies at 375F for about 15 minutes.

CAN THESE APPLE HAND PIES BE MADE VEGAN?

Yep! It’s luckily very easy to do. Simple swap the butter with vegan butter, and the pie dough with puff pastry dough. If you didn’t know, most store-bought puff pastry is naturally vegan. Follow all the same instructions, but bake at 350F for about 20 minutes. As for the egg wash, swap with a mixture of 2 tbsp milk alt with 1 tbsp maple syrup.

I also suggest just cutting out 3.5″ round slices of puff pastry rather than apple shapes. If you cut apples, they may lose their shape when baked so it won’t be worth the extra detail in the end.

CAN I MAKE THESE PIES AHEAD OF TIME AND BAKE LATER?

Yep! Fill and crimp the mini apple pies but leave off the egg wash. Store the bare pies in an air tight container in the refrigerator. They will keep for a couple days.

Then to bake, apply the egg wash and cinnamon sugar and bake as usual. I also recommend this route if you’re only baking these pies for a couple people. Bake what you need, and chill the bare pies until you want another fresh batch.

HOW TO STORE APPLE HAND PIES

Store the apple hand pies in an air tight container at room temperature where they’ll keep for about 4 days. To last even longer, store in the refrigerator for about 1 week.

Make sure to tag me @butternutbakery on Instagram and leave a review below if you make these apple hand pies. To pin this recipe and save it for later, you can use the button on the recipe card, the buttons above or below this post, or on any of the photos above. Happy baking!

These delicious apple hand pies take all the work out of making apple pie. The filling is just 6 simple ingredients, and the crust is store bought pie dough with a coating of cinnamon sugar – baked and ready in under an hour!

GLUTEN FREE – Use the pie dough recipe from my gluten free peanut butter and jelly pop tarts. Make sure you let the dough chill before use. Then when rolling, if it’s breaking apart, let it rest for a few minutes. It’s much easier to work with when it’s closer to room temp. Then once the pies are formed, freeze them for about 10 minutes before baking. Bake at 375F for about 15 minutes.

VEGAN – Swap the butter with vegan butter, and the pie dough with puff pastry dough. If you didn’t know, most store-bought puff pastry is naturally vegan. As for the egg wash, swap with 2 tbsp milk alt mixed with 1 tbsp maple syrup. Follow all the same instructions, but bake at 350F for about 20 minutes. I also suggest just cutting out 3.5″ round slices of puff pastry rather than apple shapes. If you cut apples, they may lose their shape when baked so it won’t be worth the extra detail in the end.

APPLE TEMPLATE – The size of the template I made is 3.5″ wide by 3.75″ tall. I recommend cutting a template out of something thick like cardboard as this makes it much easier to work with. Otherwise, I suggest this apple cookie cutter. It’s slightly larger than the template I used, so you may only be able to get about 6 apples per pie dough sheet.