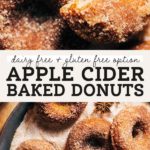 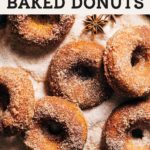 Fall can only mean one thing – apple cider donuts! These baked donuts have the sweet tartness of apple cider with a coating of cinnamon sugar. They’re soft, moist, tender, and so fun to make.

What makes these the BEST apple cider donuts?

Let’s be real, frying donuts at home is a PAIN. Between heating and keeping the oil at the exact temperature, to discarding and cleaning up all that oil, it’s just too much for me. So it’s completely acceptable to take the much easier route and just make baked apple cider donuts. They’re just as delicious, and for so so many reasons.

For starters, the TEXTURE. They’re so soft and pillowy but remain really moist and tender. This is due to the fact that these donuts are made with oil instead of butter. Apple sauce is also added to further that moist texture. That paired with the crunchy cinnamon sugar coating is a match made in heaven.

To take it a step further, I made this recipe completely dairy free! It was nearly intentional, as I wanted to create an oil-based donut for a really moist texture, but a few simple ingredient swaps later and the recipe ended up without any dairy.

Not only that, but it’s so easy to make these donuts gluten free if you prefer. I tested it both ways and whether you use regular flour or gluten free flour, you’ll still end up with a delicious apple cider donut that’s perfectly soft and sweet.

This recipe is super simple and SUPER fast to make, but here are a few things you should know to ensure they turn out just right:

I honestly don’t know which I love more, a glazed donut or a cinnamon sugar coated donut. But in this case, cinnamon sugar is definitely the way to go. The warm cinnamon and sweet sugar paired with the tart apple cider donut is just too good to be true.

First, allow the donuts to cool before coating. This makes them easier to handle and ensures they stay in tact when tossing in the sugar.

Then, dunk the donuts in melted butter. Since I chose to make this a dairy free recipe, I recommend using vegan baking butter for this step. Of course if you aren’t dairy free, you can choose to use regular butter instead.

After dunking, allow some of the butter to drip off. Then transfer to a dish filled with cinnamon sugar and toss to coat, covering the entire outside surface of the donut.

Do these apple cider donuts have to be made dairy free?

Nope! If you want to use regular milk instead of almond milk, or regular butter instead of vegan butter, go right ahead. It will not change the outcome.

What if I don’t have a cinnamon stick?

If you don’t have cinnamon sticks to toss in with the cider, that’s OK. Of course it’s preferred, but it will not make or break the recipe.

Can these donuts be made vegan?

I have not tested it, so I can’t say for certain. Egg replacements I would try include – 3 tablespoons of aquafaba (liquid from a can of chickpeas) for 1 egg; 1 flax egg which is 1 tbsp ground flaxseed mixed with 2.5 tablespoons of water in place of 1 egg; an egg replacement mix.

Since my recipe is oil-based, these donuts will stay moist for quite some time. Store the donuts in an air tight container in the refrigerator and they will keep tasty for about 1 week.

Make sure to tag me @butternutbakery on Instagram and comment below if you make this apple butter spice cake. To pin this recipe and save it for later, you can use the button on the recipe card or on any of the photos above. Happy baking!

These moist apple cider donuts are baked to perfection, and are completely dairy free with the option to make them gluten free as well! 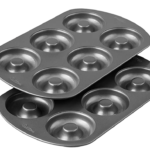 GLUTEN FREE FLOUR – I have tested this with gluten free flour as well and they turned out great! But I recommend weighing the flour rather than measure by cups, as it’s very easy to use too much when measuring. The flour I use is Bob’s Red Mill 1-to-1 Gluten Free Baking Flour.