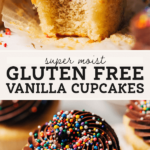 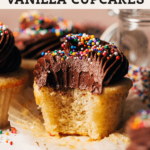 These are the BEST gluten free vanilla cupcakes! Not only are they super moist, but they’re fluffy, bouncy, and loaded with real vanilla flavor. Seriously, they’re so good you would never even know they’re gluten free. I topped mine with chocolate frosting, but I’ve also included a vanilla option in the recipe below!

What makes these the BEST gluten free vanilla cupcakes?

After sharing my perfect vanilla cupcake recipe, I knew I had to make a gluten free version! So what makes these so good? It’s based off of a regular cupcake recipe in order to mimic that moist but bouncy consistency.

And these cupcakes are just that. They’re so moist, so tender, and so fluffy with loads of vanilla! So how is this possible with gluten free cake?

The combination of these ingredients is what creates a light, fluffy, rich, and moist gluten free vanilla cupcake. To be quite honest, I might even like these more than my regular vanilla cupcake recipe. The gluten free flour makes these so delicate that the cake just melts in your mouth.

How to make gluten free cupcakes

Now that we know WHAT makes these cupcakes so good, let’s get into the process of baking them. They follow the standard creaming method like most cake recipes, but here are a few tips to ensure they turn out just right:

What is the best gluten free flour for baking cupcakes?

To make this recipe as simple as possible, I opted for a gluten free baking flour blend. It’s a special blend of different gluten free flours to mimic the affects of regular all purpose flour.

My two favorites are Bob’s Red Mill 1 to 1 baking flour and King Arthur Flour measure for measure flour. I tested these cupcakes with both and each batch turned out the exact same.

For this recipe, I paired the cupcakes with a simple and silky chocolate buttercream.

Can I make this recipe dairy free as well?

Can I make this recipe vegan?

Unfortunately I can’t confidently make substitution recommendations for the eggs because I haven’t tested any myself. But I do plan on creating a vegan vanilla cupcake recipe and I’ll be sure to test a gluten free version for those as well!

Can I replace the oil?

I haven’t tested these cupcakes with anything other than the vegetable oil, but a safe replacement would be melted coconut oil. Just make sure all other ingredients are at room temperature, otherwise the coconut oil can harden while mixing. Another option is unsweetened apple sauce but I can’t guarantee the cupcakes will turn out the exact same.

What are the best cupcake liners?

I love parchment cupcake liners because nothing stick to them. I linked my favorite at the bottom of the recipe card!

Do you have a gluten free chocolate cupcake recipe?

Store the cupcakes in an airtight container and keep them in the refrigerator. They’ll keep moist for up to 4 days.

For more gluten free cakes, check out my:

Make sure to tag me @butternutbakery on Instagram and leave a review below if you make these gluten free cupcakes. To pin this recipe and save it for later, you can use the button on the recipe card, the buttons above or below this post, or on any of the photos above. Happy baking!

Watch how to make these gluten free vanilla cupcakes:

These gluten free cupcakes are so moist and bouncy that you would never even know they’re gluten free! They’re also baked with a tablespoon of vanilla for extra flavor and topped with a smooth chocolate buttercream. 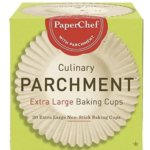 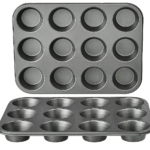 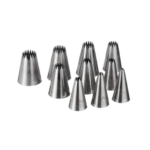 *GLUTEN FREE FLOUR – Make sure to use a cup for cup gluten free baking flour blend, one with xanthan gum in the mix. I used both Bob’s Red Mill 1 for 1 and King Arthur Measure for Measure flour and they worked the exact same! Also, when measuring, spoon the flour into the measuring cup and level it off with a flat edge. Don’t scoop directly into the flour or shake the flour down into the cup. We want a light and fluffy cup of flour.

**BUTTERMILK – You can also make your own buttermilk. Pour 3/4 cup of milk and remove a scant tablespoon. Then replace with a scant tablespoon of vinegar. Mix and let it sit for about 10 minutes to curdle before use.