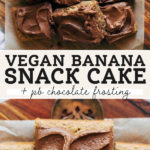 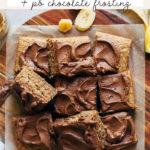 This vegan banana cake is INSANELY good! It’s incredibly moist, FULL of ripe banana flavor, and very easy to make. Not to mention the rich and fudgy vegan peanut butter chocolate frosting on top. I’ve also made this cake completely gluten free, but you can opt to use regular flour if you aren’t living that GF life. Either way, you’re left with a moist and spongey cake that will make you question if it’s ACTUALLY vegan (spoiler alert, it really is!).

Baking a vegan cake isn’t that much different from baking a regular cake. And with so many plant-based baking substitutes out there, like vegan butter, it’s now even easier! Here are the main three ingredients that turn this cake into a vegan banana cake:

Aquafaba is the liquid from a can of chickpeas…simple as that. It’s something that is usually discarded or washed down the sink, but it can actually be used as an egg replacement in vegan baking. So the next time you open a can of chickpeas, save the liquid (aquafaba) and store it in the fridge.

Aquafaba closely mimics egg whites and has the ability to whip just like it. It can either be used in liquid form, lightly beaten until frothy, or whipped into a stiff and fluffy consistency. For this recipe, we’ll be using the latter. You start by whipping the aquafaba until it’s light and fluffy just like the picture above (yep, that’s not egg whites!).

Whipping air into the aquafaba helps provide some lift to this cake, but it also helps bind the cake together. To provide some stability, cream of tartar is used in conjunction with the aquafaba in order to give it some strength. Otherwise, it won’t whip to the volume needed.

Can you taste it?

Nope! Trust me, if you could taste chickpeas in this cake I would not have gone this route.

Who long does it take to whip?

Aquafaba takes a few more minutes to whip as opposed to egg whites. It’s not as protein rich, so it needs a little extra time to reach those soft peaks.

Add it to a bowl and mix using a hand or stand mixer with a whisk attachment. Whip on high speed for about 8 minutes, or until it’s light, white, and fluffy just like the mixture above.

This is a super simple recipe, but if it’s your first time baking a vegan cake it can get a little tricky. Here are a few tips to ensure it turns out delicicous:

Outside of these tips, the rest should be smooth sailing. Once it’s baked, test the center with a toothpick before removing from the oven. It takes a little bit longer to bake than a regular cake (because it’s so moist), so don’t take it out of the oven unless it’s fully done.

How to make fudgy vegan frosting

I honestly don’t know which I love more – the banana cake or the peanut butter chocolate frosting. It’s silky, creamy, fudgy…I could just eat it by the spoonful.

As far as the peanut butter, make sure to use a standard peanut butter like Jif or Skippy. I tested it with a natural peanut butter but the frosting turned out a bit oily and separated. Still delicious, but not as smooth as it could be.

For the chocolate, I opted for cocoa powder as I didn’t want it to over power the peanut butter. It helps thicken the buttercream and add a layer of rich chocolatey goodness. Feel free to use cacao powder if you prefer!

Can I use regular flour instead?

Yep! Simply swap the gluten free flour for regular flour, but still use the oat flour. It helps give this cake some texture which breaks up the overall softness of the cake. Also, omitting the oat flour and using regular or GF flour in its place will throw off the cake overall. It’s there for a reason!

You can either use pre-blended oat flour or ground up some oats in a food processor.

Plant-based butters now come in many varieties, but try to use vegan baking butter sticks. I really like Earth Balance or Country Crock Plant Butter. Both can be found in most grocery stores!

Can I use regular butter instead?

Yes, if you are not vegan you can use regular butter in place of the plant butter. Same goes for the milk.

How long does this cake last?

For more vegan recipes, check out my:

Make sure to tag me @butternutbakery on Instagram and leave a review below if you make this Vegan Banana Cake. To pin this recipe and save it for later, you can use the button on the recipe card, the buttons above or below this post, or on any of the photos above. Happy baking!

This vegan banana cake is super moist and topped with a fudgy peanut butter chocolate frosting. It can also be made gluten free!

OATS – Use certified gluten free oats if making this gluten free. You can also make your own oat flour by blending oats in a food processor.