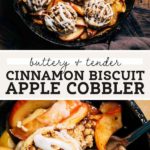 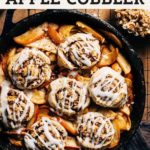 How to make cinnamon roll biscuits

This hybrid is basically comprised of a buttery and flaky biscuit but with the inside of a sweet cinnamon roll. The two together create a delicious sweet biscuit that works so well in this apple cobbler. Here’s how to make these cinnamon biscuits:

After the cobbler is baked, the biscuit rolls are topped with icing for a little extra sweetness…just like a cinnamon roll. But it’s completely optional as the rolls are delicious on their own!

Tips for making apple cobbler in a skillet

What I love about this recipe is how the apples are sautéed and baked all in the same dish. The apple cobbler starts by heating sliced apples in a skillet until tender. Then the biscuits are added on top before transferring the skillet to the oven to bake all the way through. It only requires a few simple steps, but here’s what to look out for along the way:

What are the best apples to use in apple cobbler?

For this recipe, I used fuji apples. Not only are they perfect for baking, but they’re also fairly inexpensive compared to honey crisp. I say this because we’re looking for a firm, crisp, and sweet apple for this cobbler and fuji and honey crisp are my top two picks.

This is because they’re both sweet but slightly tart and bake perfectly. They don’t turn too soft and bake into the right amount of tenderness.

Avoid using traditional baking apples like granny smith as these will be too sour and tart for this recipe. Apples really shine in this dessert, so we want to use good quality and flavorful apples since there isn’t a ton of sugar in the cobbler.

Although I have not tested, I would suggest replacing any flour in this recipe with a good quality all purpose gluten free baking flour. I like the one for one by Bob’s Red Mill. I would suggest weighing the flour instead of measuring to ensure accuracy as gluten free flour tends to be a bit more dense than traditional.

How to store apple cobbler

After the cobbler is baked and you have some leftovers you need to save, simply cover the skillet in plastic wrap and store in the refrigerator. Then when you want to heat it back up, just uncover the pan and bake at 300F for about 10 minutes. It will keep in the refrigerator for up to 5 days.

Make sure to tag me @butternutbakery on Instagram and comment below if you make this cinnamon biscuit apple cobbler. To pin this recipe and save it for later, you can use the button on the recipe card, the buttons above or below this post, or on any of the photos above. Happy baking!

**DAIRY FREE – For dairy free buttermilk, use any milk alternative mixed with vinegar. Measure out 1/2 cup of the milk, then remove 2 tsp of milk and replace with 2 tsp of vinegar. Mix the two together and let it sit for a about 10 minutes to curdle. For the butter, substitute with vegan baking butter.