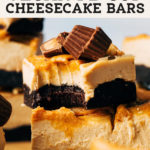 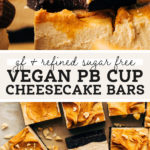 This ultra creamy vegan peanut butter cheesecake is so good that you’d never even know it’s dairy free! Made with a raw vegan chocolate brownie crust and rich no bake cashew peanut butter cheesecake, these bars are completely gluten free, dairy free, and refined sugar free. Just blend, press, spread, and freeze until set. They’re the perfect vegan treat to keep in your freezer and snack on whenever you’re craving something sweet.

How to make a raw vegan brownie crust

I have to admit, I use this recipe so often when creating delicious vegan desserts. It’s the perfect chewy and chocolatey consistency the works so well in indulgent vegan and gluten free recipes. I come back to it time and time again for its flavor and ease, as it’s made up of just 5 simple ingredients:

These ingredients are blended in a food processor until it reaches a crumbly but moist consistency. When it’s packed down into the bottom of a pan, it takes on a completely different texture. It’s chewy and rich just like a brownie, with a deep chocolate flavor.

It’s also a flexible recipe as you can adjust it to an 8″ square pan, or a 1 pound loaf pan. See how that looks with these Healthy Brownie Cookie Dough Bars. And if you don’t have access to almond flour or just want to use something different, feel free to use oat flour instead as it works just as well. I opt for almond flour as I prefer the richness it adds to this brownie crust!

What is vegan peanut butter cheesecake made of?

As you may know, I’ve cut gluten and dairy out of my diet within the past couple years due to a digestive sensitivity. Cheesecake was one of my FAVORITE desserts so I knew I had to make a dairy free version that tastes just as good. It took some research and some trial and error, but I landed on a formula that creates a super thick and creamy cheesecake that tastes just as indulgent.

The secret? Cashews! Due to their mild flavor but creamy and fatty texture, they’re the perfect substitute for cream cheese when paired with the right ingredients. The trick so to tenderize the cashews before use, as this will help create a really smooth cheesecake texture once blended.

To tenderize, you can either allow the cashews to soak in water overnight OR boil them for 10 minutes before use. I tend to forget to prep them the night before, so I typically opt for boiling. Either way, the water helps hydrate and plump up the cashews, making them soft and pliable.

After they’ve boiled, the cashews are drained and added to a high speed blender along with almond milk, lemon juice, maple syrup, and vanilla. The almond milk helps smooth and thin out the batter, while the lemon juice adds that signature cream cheese tang.

Of course this wouldn’t be vegan peanut butter cheesecake without the peanut butter! By adding loads of peanut butter, it helps create an even CREAMIER texture, alongside another addition of coconut butter. The two help create a thick batter that I could honestly eat by the spoonful. Then just spread the batter into your pan and freeze to set.

Do I have to use a high speed blender?

If you’d love to make these cheesecake bars but don’t have a high speed blender, here are some other options:

Either option will give you a delicious vegan peanut butter cheesecake, it just might not be AS smooth as it could be compared to a high speed blender.

This recipe is pretty forgiving, so here are some substitutions I would recommend. If they aren’t on this list, it’s likely it won’t work!

How to make keto vegan cheesecake

To make this a keto recipe, simply omit the crust as the cheesecake itself is high in fat and low in carbs. You can also substitute the maple syrup for you favorite keto sweetener. Feel free to top them or dip the squares in melted raw cacao.

Can I halve the recipe?

Yes, cut the recipe in half and it will fit into a 9×5 loaf pan.

For more vegan dessert recipes, check out my:

Make sure to tag me @butternutbakery on Instagram and comment below if you make these Vegan Peanut Butter Cup Cheesecake Bars. To pin this recipe and save it for later, you can use the button on the recipe card or on any of the photos above. Happy baking! 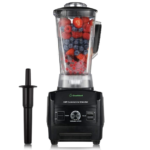 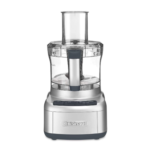 Peanut Butter – Make sure you use natural creamy peanut butter, made with nothing but peanuts. You can also use any nut or seed butter, as long as it’s natural.

Coconut Butter – If you can’t find coconut butter, feel free to use your flavor vegan yogurt.