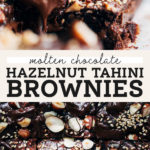 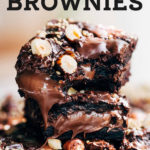 You’ve never had a brownie quite like this one! These molten chocolate hazelnut tahini brownies are made with a rich and fudgy tahini brownie that’s baked with a layer of Nutella right in the center. When sliced, the brownies remain extra fudgy with a molten and melty chocolate hazelnut filling. The savory tahini helps balance out the sweetness of the Nutella, creating a well balanced brownie with a completely unique flavor.

Think peanut butter but instead of peanuts, it’s sesame seeds. Tahini is made up of ground toasted sesame seeds, giving it creamy texture and savory flavor. It’s a staple Middle Eastern ingredient that can be used in dishes such as hummus or halva, but it can also be used alone as a dip.

But not all tahini is created equal. It’s important to use a good quality tahini, otherwise you will find it can taste pretty bitter. My favorite is by Soom Foods because it’s not too bitter and bakes really well. A couple other favorites include the Trader Joe’s tahini and the Whole Foods or Sprouts brand tahini.

Why use tahini in brownies?

These brownies are an absolute dream. They bake into this perfectly fudgy texture that’s not too gooey or runny. The secret is using tahini. By replacing the butter with tahini, we’ve increased the fat content of the batter to create a rich texture.

Tahini is also an emulsifier, meaning it allows both the oil and water particles within a substance to become finely dispersed rather than separated. Eggs are also an emulsifier, so pairing the two together gives you a well rounded brownie that’s both fudgy and chewy all at the same time.

How to stuff a brownie with nutella

There’s something so rewarding about lifting out that first slice of your Nutella filled brownie to see that melty gooey center just oozing out. It makes these brownies look and taste so irresistible.

To achieve that ooey gooey layer, you must first freeze a slab of Nutella. Otherwise, if you try to spread room temperature Nutella into the center of this brownie batter, it will mix in with the batter thus ruining those distinct layers. Freezing allows us to nest the Nutella right in between two layers of brownie batter, preventing the two from blending together.

Now the trickiest part about this process is not the Nutella, but the super thick brownie batter. Tahini tends to seize up when mixed with a bit of water, so the batter becomes very thick. To make things easier, follow these extra tips:

When to slice your brownies

Patience is key with these brownies, as it’s important to NOT slice into them when they’re still hot or warm. Allow the brownies to cool completely before slicing. First, let them cool at room temperature for about 30 minutes. Then transfer to the refrigerator for about an hour to filly set. You know they’re ready when the bottom of the pan is no longer warm to the touch.

At this point, the brownies should be very easy to lift out of the pan and slice. If the brownies start to cave in the middle as you lift them out, they need more time to chill. They may also stick to the sides of the pan that have no been covered in parchment paper. Simply run a knife along those two edges before lifting them out.

When you go to slice, use a very large and sharp knife if you have one. Swift one-motion cuts are ideal for brownies, especially layered ones. Otherwise, sawing down the brownies with a small knife will drag the crumbs all along each cut, giving you clunky and uneven slices.

What can I substitute for the tahini?

If you’re on the fence about tahini, or if you’ve never tried it before, I urge you to not shy away from it. Its slightly bitter and savory flavor is the perfect pairing to the super sweet and rich Nutella. The flavor is also not overpowering, so if you don’t like the flavor of tahini chance are you will still like these brownies.

If you are completely against it, you an replace the tahini with melted butter or any other type of natural nut butter (made with just one ingredient). Just know that your brownies will vary in texture and flavor depending on what you use.

Can I make these gluten free?

I have not tested this, but I recommend using a good quality 1-to-1 gluten free baking flour if you want to give it a try. This one by Bob’s Red Mill is my favorite.

Can I make these vegan?

Luckily, the tahini replaces the butter in these brownies. But as far as the eggs, you can try using 3 flax eggs (3 tbsp ground flax seed mixed with 6 tbsp water) or replace with an additional 1/2 cup of tahini. For the Nutella, swap with vegan Nutella. Just know that I have not tested this myself.

How to store your Nutella tahini brownies

Store the brownies in an air tight container in the refrigerator. You can heat one up for about 10-15 seconds in the microwave if you prefer a more melty brownie, or they can be eaten chilled. They will keep for up to 6 days.

For more brownie recipes, check out my:

Make sure to tag me @butternutbakery on Instagram and comment below if you make these Molten Chocolate Hazelnut Tahini Brownies. To pin this recipe and save it for later, you can use the button on the recipe card or on any of the photos above. Happy baking!

Extra fudgy tahini brownies are baked with a layer of nutella right in the center, making for a perfectly balanced sweet and savory brownie. 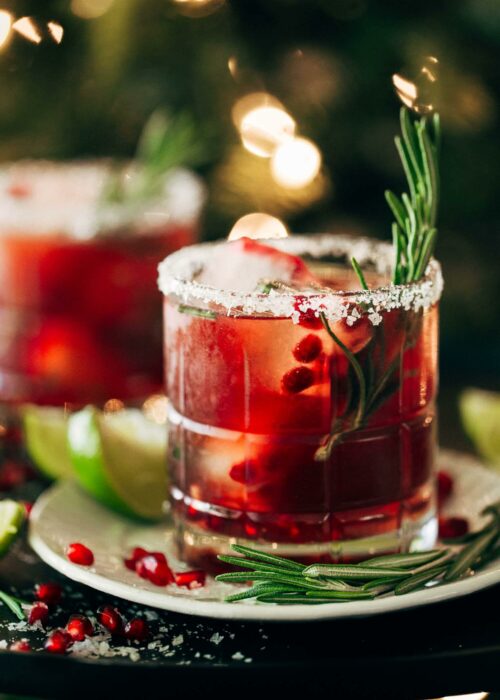 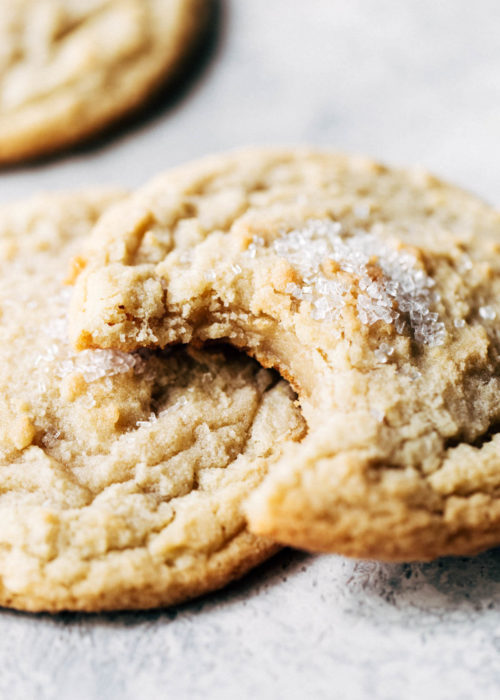 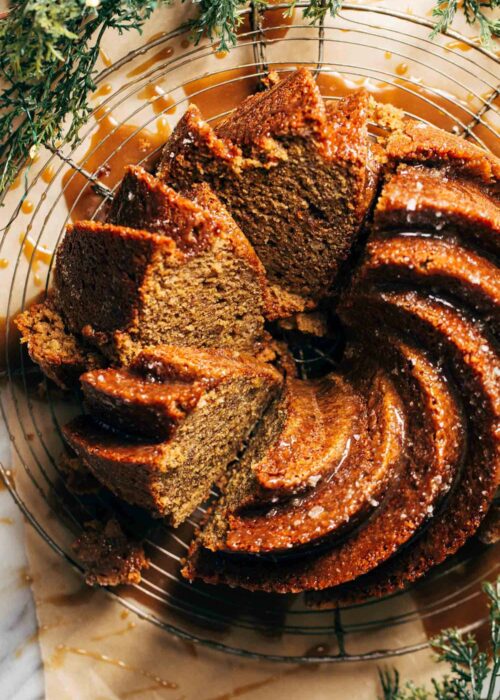