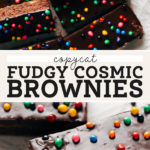 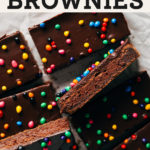 These homemade cosmic brownies taste just like the real deal but with way more chocolate flavor! They’re fudgy, rich, and sprinkled with their signature candy coated chocolates. These brownies are also so easy to make and do not require any special equipment. Just mix, bake, and enjoy!

What are cosmic brownies?

They basically taste like childhood. I remember cosmic brownies being one of my FAVORITE Little Debbie treats, next to star crunch and oatmeal cream pies. But cosmic brownies are a pre-packaged brownie with a really dense and fudgy brownie topped with a soft and creamy chocolate icing.

So what makes them “cosmic”? Surprisingly, they were inspired and named after the Cosmic Bowling trend that started in the late 90s. The bright candy coated sprinkles against the dark chocolate brownies are to resemble the bright neon contrasts in cosmic bowling, like what you would see under a black light.

I never knew this until doing my research for this post, but now it definitely makes sense and makes me feel even more nostalgic when I think of cosmic brownies!

How to make fudgy brownies

Cosmic brownies are so dang good because they have that delicious dense, fudgy and chewy texture. So in order to recreate that same richness, I pulled out all the stops to create a brownie just like the real deal. Here’s how to achieve that same texture:

The chilling process seals the deal. If you dig right into these brownies when they’re still warm, they’ll be a soupy mess. Chilling will help tighten up their texture, giving you a dense but soft and fudgy brownie.

What is on top of a cosmic brownie?

Chocolate ganache is also very easy to make and only takes a couple minutes to whip up. Oh, and it only requires 2 ingredients; chocolate and heavy cream.

The heavy cream is heated until boiling, then gets poured over the chocolate. The cream slowly heats and melts the chocolate for about 30 seconds, then it’s ready to whisk into a smooth consistency.

In the end you’re left with a glossy, smooth, and rich ganache that’s poured over the chilled brownies. Once leveled out, you can top with your rainbow candy sprinkles.

How to slice homemade cosmic brownies

To slice, I recommend working with the bars when they’re completely set and chilled. Each slice should also be one quick motion, so use a very large and sharp knife. Never drag the knife along the brownie as the brownie will stick to the sides of the knife and drag all down that slice, give you very uneven edges.

Also make sure to wipe off the knife between each cut to prevent any sticking and dragging.

How to store homemade brownies

Can I make these gluten free?

I haven’t tested it, but you can try swapping the all purpose flour with a good 1-to-1 gluten free baking flour with xanthan gum in the mix. I recommend this one by Bob’s Red Mill.

For more brownie recipes, check out my:

Make sure to tag me @butternutbakery on Instagram and comment below if you make these Homemade Cosmic Brownies. To pin this recipe and save it for later, you can use the button on the recipe card or on any of the photos above. Happy baking!

These homemade cosmic brownies taste exactly like the original Little Debbie treat but with so much more flavor! 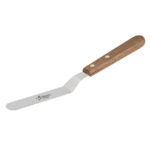 Welcome to Butternut Bakery! I’m here to satisfy your insatiable sweet tooth and help perfect your baking skills. There are desserts here for everyone, whether you’re gluten free, vegan, or love your butter and flour. Either way, you’re sure to find your new favorite dessert recipe.

I am SO ready for pumpkin season !!! So let’s ki

NEW banana tres leches cake! This is one of the la

Grasping on to these last bits of summer with thes

Celebrating 200k of you with my funfetti cake! I r