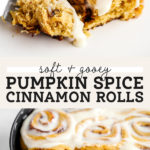 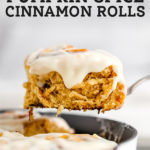 These Pumpkin Cinnamon Rolls are SO soft and delicious. No crispy edges here, just fluffy cinnamon rolls with a smooth cream cheese icing. With pumpkin in the dough and filling, these easy cinnamon rolls are bursting with pumpkin spice flavor.

Why I love this recipe

What I love most about these Pumpkin Cinnamon Rolls is how they’re so soft and fluffy. I honestly could not stop eating them because they’re just so so good! The best part about a cinnamon roll is the ooey gooey center, but why only leave that for one bite?

These cinnamon rolls are soft all throughout with no crispy edges. You can dig your fork in like you would a slice of cake and it cuts so nicely. That’s how you know it’s a good cinnamon roll recipe!

Adding the pumpkin is what creates that ooey gooey texture. I honestly wish there was an ingredient that mimicked pumpkin just without the flavor… I’d add it to everything!

Making homemade cinnamon rolls can seem like such a daunting task… mainly because yeast is involved. But if you follow these tips, you should get perfect rolls every time!

Should I be using a cast iron skillet?

For this recipe, I baked my Pumpkin Cinnamon Rolls in a large cast iron skillet. This is my favorite way to bake cinnamon rolls because it heats evenly and leaves you with soft rolls both in the center AND on the edges of the dish.

If you use a cast iron, make sure you butter the entire inside before placing your rolls.

I used a large 12″ cast iron skillet for this recipe. If you don’t have one that size, you can easily bake these rolls in a 9×13″ baking dish. Instead of 14 rolls, cut the log into 12 rolls space them out evenly in the pan. Baking time will remain the same.

How to make the best cream cheese icing

Arguably, a cinnamon roll isn’t a cinnamon roll without cream cheese icing. It’s such a simple recipe but can be made so many different ways. Luckily, it’s easy to adjust it to your liking. But number one rule is to use ROOM TEMPERATURE CREAM CHEESE so you get a nice and smooth icing. I also always use Philadelphia cream cheese as off brand cream cheese tends to turn a little lumpy when beaten.

For this Pumpkin Cinnamon Roll recipe, I went with a cream cheese frosting that isn’t too thick or too thin. I did this by adding the perfect balance of milk and sugar to the recipe. To make it your own, you can reduce the amount of sugar to make it thinner or add more to make it thicker.

Can these cinnamon rolls be left to rise overnight in the fridge?

The first 45 minute proof cannot be refrigerated overnight BUT you can place them in the fridge after they’ve been rolled out and placed in the baking dish. Once rolled and sliced, place the pan in the fridge overnight. When you’re ready to bake, let the cinnamon rolls sit out at room temperature for about 30 minutes and then bake.

Any advice on how to keep the filling in the rolls as your rolling them?

If you find you’re losing a lot of filling try using room temperature butter instead.

Make sure to tag me @butternutbakery on Instagram if you make these Pumpkin Cinnamon Rolls. I love seeing these recipes come to life in YOUR kitchen! To pin this recipe and save it for later, you can use the button on the recipe card, the buttons above or below this post, or on any of the photos above. Happy baking!

These pumpkin cinnamon rolls are so soft and fluffy. They’re smothered in silky cream cheese icing and have pumpkin in the dough AND the filling!

If you find you’re losing a lot of filling when you’re rolling and cutting your rolls try using room temperature butter instead.