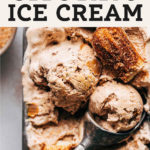 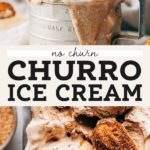 It’s going to be difficult to explain in writing how delicious this no-churn churro ice cream is. With no churn cinnamon ice cream, easy baked churros, and swirls of dulce de leche, what’s not to like? It’s sweet, creamy, and bursting with cinnamon flavor. You don’t even have to worry about frying up some fresh churros! Since updating this recipe, I’ve included the original puff pastry churro recipe as well as an easy baked churros recipe which are both delicious! The only difference is that one is a bit more involved than the other, so you can choose which route you would like to take when making this super easy ice cream.

The base of this recipe is a simple cinnamon no churn ice cream that comes together in minutes! Just mix, pour, and chill overnight. While it’s an easy recipe, here are a few things to look out for when making your ice cream:

This churro ice cream recipe is one of the first recipes I ever posted on this blog. Since updating it, I’ve incorporated a new baked churro recipe thats a bit more involved. That’s why you’re given two baked churro options – the original puff pastry recipe as well as a more traditional baked churro recipe. Both are equally delicious, it all just depends on which route you prefer!

Puff Pastry Churros – This is the original recipe involving strips of pre-made puff pastry that are baked and coated in cinnamon sugar. This is a really great SUPER easy option that will give you a more flaky churro texture throughout the ice cream.

Easy Baked Churros – This is the updated recipe that involves making the churro dough, piping it on to a baking sheet, and baking before coating in cinnamon sugar. It’s a more traditional and literal take on a churro that will give you a more chewy churro texture in this ice cream.

How to layer churro ice cream

Now the fun part – after the churros are baked and the ice cream is prepped, it’s time to layer up this no churn ice cream.

In a 1 pound loaf pan, you’ll be working in three layers. Each layer consists of cinnamon ice cream, churros, and dulce de leche. Within each layer, spread the ice cream even and dollop globs of dulce de leche on top. For the churros, tear them up into tiny pieces, especially if you’re using the easy baked churros as they’re a bit chewier. If the pieces are too large, it will be difficult to scoop out the ice cream.

For the final layer, top with ice cream and sprinkle on a few more churro pieces. Then just wrap and freeze!

How to serve churro ice cream

After the ice cream has chilled solid (preferably overnight), allow it to thaw for about 30 minutes at room temperature before scooping. This will give you smooth and soft scoops of ice cream that are still chilled enough to hold shape.

How long does no churn ice cream keep?

As long as it’s wrapped thoroughly, both with plastic wrap and foil, it will keep for up to 2 months.

For more ice cream recipes, check out my:

Make sure to tag me @butternutbakery on Instagram and leave a review below if you make this No Churn Churro Ice Cream. To pin this recipe and save it for later, you can use the button on the recipe card, the buttons above or below this post, or on any of the photos above. Happy baking!

Churros – Why are there two options? Option 1 is from the original recipe, providing lighter and flakier churros. Option 2 was added when I updated this recipe to add a more tradition chewy churro texture to this ice cream. Either one is delicious! It really just comes down to ease, as the first option is easier and faster than the second option.