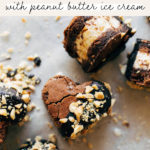 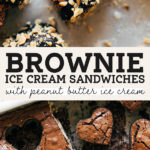 These heart shaped peanut butter brownie ice cream sandwiches are the perfect sweet treat! Two layers of rich and chewy brownies surround a hefty scoop of crunchy peanut butter ice cream. Dunk them in some salted chocolate for more chocolatey goodness and sprinkle on some more peanuts. They look so adorable, but are so easy to make for your Valentine!

This post is sponsored by Dolci Delicious but all thoughts and opinions are my own. Thank you for supporting the brands that make Butternut Bakery possible!

These sandwiches not only appear super delicious, but they taste even BETTER than they look. The brownie layer is a simplified version of my famous better than boxed chocolate fudge brownies. They’re rich, dense, chewy, and the perfect vessel to carry a thick layer of peanut butter ice cream.

And since all the heavy lifting is in making the brownies and layering up these sandwiches, I created a really simple hack to getting delicious peanut butter ice cream.

Pick up you favorite vanilla ice cream (mine is French vanilla) and let it thaw out while you make the brownies.

I prefer this method because you have a lot more control over the flavor and texture of the ice cream. I wanted mine extra crunchy, so I loaded up on the peanuts and added plenty of peanut butter. Make sure to use a really basic cream peanut butter, like Jif or Skippy.

The trick is to bake a thin layer of brownies in a 9×13 baking pan. My original recipe calls for a 8×8 pan for nice and thick brownies, but baking them in a 9×13 gives you the perfect thickness for ice cream sandwiches.

It’s also important to line your baking pan with parchment paper, allowing the paper to come up and over the two longest sides of the pan. We’ll need to lift the brownies out to build the layers.

In the middle of baking the brownies, take them out and drop them against the counter a few times. This knocks out any air that’s built up in the oven, so you’re left with a tight and dense brownie perfect for layering.

Once baked, allow the brownies to cool COMPLETELY. Place them in the fridge for at least an hour or until the entire pan is cold, even the bottom. Cold brownies are much easier to handle and are less likely to break when you form the three layers.

When the brownies are ready, lift them out of the pan by grabbing onto those two strips of parchment paper. Place onto a cutting board and slice right down the middle (along the width of the brownies).

Place one half off to the side (it’s ok if it breaks a little during the transfer) and lift the remaining half (still on the parchment paper) back into the pan, pushing it up against one side.

Then smear on a layer of the peanut butter ice cream. It should be soft and easy to spread, but not too melted. If it’s too soft, it will just push out the sides and cause a mess.

Once that’s spread even, lift the remaining half of the brownies on top and immediately place it into the freezer. Allow it to chill for at least 2 hours to completely set and harden.

Before you even think about cutting into your ice cream sandwiches, make sure they’re rock solid. If you try to slice into them when they’re still too soft, they’ll warp and the ice cream will push out the sides.

But once they’re ready, choose how you’d like to shape them! For me, I think these heart-shaped ice cream sandwiches are adorable. I used hefty heart biscuit cutters which are the perfect size and depth to easily cut out 7 sandwiches. Here is a link to the ones I used (using the second smallest size in the bunch).

I simply pressed the cutter into the layers (potentially using my body weight because of how dense these are) and wiggled the heart-shaped sandwiches out. Then I gently pushed the sandwiches out of the cutter using my finger.

You may run into a couple pesky ones, where the first layer of brownie and ice cream will pull out, but the bottom layer of brownie will stick to the paper. Not to worry, just keep moving along and then when all of your sandwiches are cut out, go back and dig out that bottom layer to stick it back on the sandwich. You may have to lift up the entire layer and peal the paper away from the brownie underneath.

If you’d also like to cut out hearts but the heart-shaped cutter you have isn’t tall enough to reach the bottom of the pan, you could use a knife. Press your heart cookie cutter into the top of the brownie, then lift it off and use that line as a guide. Take a sharp but thin knife and cut all around it.

Once you’ve cut into all of your sandwiches, chip away at the excess brownie/peanut butter layers to retrieve your hearts. If it’s difficult to cut into, dip your knife in some warm water before slicing.

Another option is to slice them into squares. Take a large knife, run it under warm water, and cut right into them.

Either way, it’s important to leave the brownies in the pan while you cut into them. The walls of the pan help reinforce the layers, so the ice cream won’t smoosh out everywhere. It shouldn’t due to how cold the ice cream is, but it’s just an added measure of precaution.

Now that the hard work is done, it’s time to decorate! But it’s important to move fast so that the sandwiches don’t melt. To make this part super quick and easy, I used Dolci Frutta melting chocolate. It comes in a really convenient heat-safe container that you just pop in the microwave to melt.

Simply heat for 30 seconds, stir, then heat for another 30 seconds. By then, you should have a cup of smooth and dark chocolate to dip your sandwiches into. The whole process is so quick that you could leave your ice cream sandwiches out of the freezer before dipping.

Next, just dunk half of ice cream sandwich into the chocolate. What I love about the Dolci Frutta melting chocolate is that it’s meant for coating and dunking, so the shell hardens super quick. The consistency is also perfect for dipping as it’s not too thick and not too thin.

So once it’s dunked, sprinkle on some chopped peanuts and place on a sheet of wax paper. After a couple minutes, the chocolate will have set!

You could also dunk the entire ice cream sandwich in the chocolate using two forks. Another option is to use a spoon and just drizzle the Dolci Frutta chocolate on top. Use as much or as little as you like!

These sandwiches melt fairly quickly, so it’s important to keep then as cold as possible.

To save for later, allow them to freeze uncovered for about 30 minutes. Remove them from the freezer and wrap individually in plastic wrap. Return to the freezer where they will keep for up to 30 days.

Although I doubt they’ll last that long! After one bite, you’ll want to have 3 more sandwiches (sharing is optional).

For more delicious Valentine’s Day desserts, check out my:

Make sure to tag me @butternutbakery on Instagram and comment below if you make these Peanut Butter Brownie Ice Cream Sandwiches. To pin this recipe and save it for later, you can use the button on the recipe card, the buttons above or below this post, or on any of the photos above. Happy baking!

Two layers of dense and chewy brownie surround a thick scoop of crunchy peanut butter ice cream. Cut them into hearts, squares, rectangles, or any shape you choose! As long as they’re finished off with a coating of chocolate and extra peanuts.

*Dolci Frutta chocolate can been found in the produce section of most grocery stores or you can purchase through Amazon.