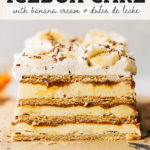 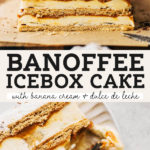 This banana icebox cake is made to taste just like a creamy banoffee pie. Layers of graham cracker, rich banana cream, and gooey dulce de leche make up this delicious frozen dessert. It’s so easy to make, requires less than 10 ingredients, and tastes just as amazing as it looks!

What is icebox cake?

An icebox cake is typically made up of wafers or cookies and some sort of creamy mixture. These are all layered together in a container and placed into the refrigerator or freezer to firm up. As it chills, the cookies become more tender as they soak up the moisture from the cream. The most common icebox cake is a zebra cake made up of chocolate wafers and whipped cream. This is something I had all the time as a kid!

Banoffee is a very popular pie that consists of a graham cracker crust with a toffee/dulce de leche and banana filling. It’s all topped off with whipped cream and chocolate shavings. The name comes from the ingredients – “banana” and “toffee”. It’s an indulgent pie comprised of two very delicious flavors that just work so well together.

What is in this banoffee icebox cake?

To marry the two together, this icebox cake is made up of three main layers:

Each are layered together three times in a loaf pan, wrapped up, and frozen solid. Once it’s frozen, the cake then thaws at room temperature for about 45 minutes to soften. The end result is a chilled but creamy icebox cake with lush banana cream, rich dulce de leche, and tender graham crackers.

I’m giving Magnolia Bakery a run for their money on this one. They are so well known for their rich banana pudding, and this one is just as thick, creamy and delicious.

The banana cream pudding is made up of two main components (which you can guess from the name): whipped cream and vanilla pudding.

The whipped cream is made with a bit of cream cheese to create a thicker and sturdier consistency. It’s VERY important to work with room temperature cream cheese otherwise your banana pudding will turn out a bit lumpy.

For the banana pudding, the same process applies but it a separate bowl. More cream cheese is mixed (at room temperature) until smooth. Then slowly pour in your milk until it starts to thin out. Before it turns liquid, mix in a packet of vanilla pudding mix. Then, once that’s smooth, mix in the rest of the milk.

It’s all a process of slowly incorporating ingredients in order to achieve a really smooth texture. Once the cream and pudding are mixed separately, you then gently fold the whipped cream into the pudding. In the end it should look like the picture above!

This is then chilled for 20 minutes to thicken even further. Do not fold in banana slices until you’re just about ready to assemble the icebox cake. I found the bananas would brown if they were refrigerated before frozen.

Luckily, the only layer of this cake that needs to be made from scratch is the banana cream pudding. The rest is just graham crackers and dulce de leche.

To make your icebox cake, you will need a 9×5 loaf pan. Place a sheet of plastic wrap inside the pan so that it covers the bottom and two longest sides. Allow the plastic wrap to hang over the sides while you assemble the cake.

Layer the bottom in graham crackers, cutting them down to size so they completely cover the base. Then spread on a thin layer of dulce de leche (about 2 hefty spoonfuls). Once that’s down, spread a thick layer of the banana cream on top.

Repeat this process two more times, so you have three layers each of the three ingredients. Top the cake off with a layer of graham crackers and cover in the plastic wrap overhang. Then cover the pan in foil and freeze for at least 4 hours or overnight.

Where can I find dulce de leche?

This is typically found near the cans of sweetened condensed milk or evaporated milk in the baking aisle of most grocery stores. If it’s not there, it could be in the Hispanic foods section. Wherever you find it, make sure to pick up a few cans. It’s something I always like to keep handy in my pantry as a simple addition to any dessert!

Can I make this recipe gluten free?

How to serve icebox cake

When you release the cake from the pan, it should be frozen solid. You can serve it this way, but I prefer to allow the cake to soften at room temperature. Let the cake sit at room temp for 30-45 minutes before serving. It will still be cold but the banana and dulce de leche filling will become much creamier and softer.

How to store icebox cake

For the whipped cream topping, only add this when you are ready to serve the icebox cake. Otherwise, with any leftovers, I recommend scraping off the topping and turn the cake back into the loaf pan. Cover and freeze for up to 1 month.

For more frozen desserts, check out my:

Make sure to tag me @butternutbakery on Instagram and comment below if you make this Banoffee Icebox Cake. To pin this recipe and save it for later, you can use the button on the recipe card or on any of the photos above. Happy baking!