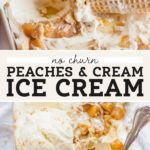 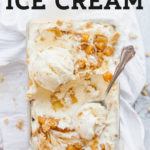 I hope you know that I actually have Peaches & Cream playing in the background as I write this. I just…I had to. It’s all I can think about right now. Hang on the chorus just hit. BRB…

OK I’m back. Now let’s talk about THIS peaches and cream ice cream. After shooting these photos, you would have found me hunched over the pan just shoveling ice cream in my mouth. I knew it was going to be good…I mean cream cheese is involved…but I didn’t expect it to be THIS FREAKING GOOD. I made this when my boyfriend was in Vegas for a bachelor party and he told me multiple times to save him some because he knows I have no self control. He even drunk facetimed me to remind me again (which was very entertaining). Now that I think about it…I was in the middle of eating ice cream when that happened but it was unrelated to this. What can I say, I love ice cream. ANYWAY when he got home he had the biggest bowl and ate the entire thing. He gave me probably the strongest reaction he’s ever given me. I think he threw a “WOW” in there when I usually just get “it’s good” and a nod of approval. I NEED MORE THAN THAT NICK.

But back to this recipe. The base is cream cheese ice cream which honestly I could have stopped there and I would have been happy but I wanted to bump it up a bit. I knew I wanted to add a fruity element so naturally I took the peaches and cream route. They’re in season and were the perfect addition. I had some leftover graham crackers from my graham cracker truffles recipe and it just set this thing over the edge. UGH. SO GOOD. Look out Ben & Jerry’s. I’m coming for your brand.

OH and it’s super easy to make. Like the title reads, it’s no churn. You don’t need any fancy equipment to make your own delicious ice cream. Just mix it up, pour it in a pan, freeze, and you’ve got yourself some gourmet ice cream!