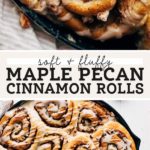 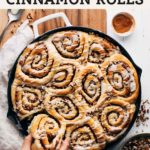 These maple pecan cinnamon rolls are the perfect treat to make this fall! They’re made by hand and swirled with a maple cinnamon pecan filling and topped with maple icing. Each roll is tender and gooey throughout with a delicious crunch from the pecans. They’re also perfectly light and fluffy, thanks to Fleischmann’s® RapidRise® Instant Yeast!

This post is sponsored by Fleischmann’s® Yeast but all thoughts and opinions are my own. Thank you for supporting the brands that make Butternut Bakery possible!

WHAT MAKES THESE MAPLE PECAN CINNAMON ROLLS SO DELICIOUS?

These cinnamon rolls are a unique twist on a classic, with added pecans and maple syrup that pair so well with the signature sweet cinnamon. They’re like the perfect homemade cinnamon rolls, but taken up a notch.

On top of the flavor, these rolls puff up nice and tall but are completely soft all the way through. They’re so tender and gooey all throughout and each bite just melts in your mouth.

On top is a sweet maple icing that soaks right into these warm rolls. It’s another way of adding that delicious maple flavor to these cinnamon rolls and can be used as a light drizzle or a heavy pour, depending on your icing preference.

These are also so easy to make. Using Fleischmann’s® RapidRise® Instant Yeast allows these rolls to proof quickly, so the dough only has to proof for 1 hour before baking. This is unlike other recipes that require a double proof, the first for 30 minutes to an hour and the second for another hour. No one wants to wait around for their rolls!

Last but not least, you do not need an electric mixer or any other fancy equipment for this recipe. It’s completely made by hand, and a majority of it stays within the mixing bowl. This makes clean up really quick so you can get back to spending time with your family!

This is a foolproof recipe and the rolls turn out perfect every single time (trust me, I’ve made these MANY times). But if you’re brand new to working with yeast, or it’s your first time making cinnamon rolls from scratch, here are a few times to follow:

For even more baking techniques, check out Fleischmann’s® Yeast Baking Basics. It’s full of helpful tips to prepare your dough. Or, if you have any trouble along the way, their troubleshooting guide for yeast dough is very useful.

Once the dough is finished, let it rest for 10 minutes before filling, rolling, and cutting. This allows the dough to rise, gives the dry ingredients a chance to fully absorb, the gluten strands to relax. After 10 minutes, the dough will nearly double in size and become much easier to roll out.

While the dough rests for 10 minutes, this gives the perfect amount of time to mix up the filling. It’s made up of just 4 simple ingredients and comes together in minutes. This consists of butter, brown sugar, cinnamon, and maple syrup.

But before you start, make sure the butter is at room temperature. This is important for 2 reasons. One, if the dough is too firm it will be very difficult to spread and create tears and possibly holes in the dough. Two, if it’s too thin or melted, the filling will slip and slide all around the surface of the dough and could squish out the sides when you cut the rolls.

So to the room temperature butter, add the brown sugar, cinnamon, and maple syrup and mash together with a fork. Eventually it will smooth out to the point where you can stir the mixture together. It should be the consistency of a soft paste.

Spread the filling all around the surface of the rolled dough, leaving a 1/2 inch border around all 4 edges. This gap gives the cinnamon rolls a chance to seal up at the ends. Then sprinkle a layer of chopped pecans on top.

Now roll the dough from the side closest to you to create a giant log. Let it rest on top of the seam and press the two ends in towards the center. This will help condense the log just a bit to undo any stretching that may have happened during the rolling.

Ditch the knife, it’s time to use dental floss on these rolls! Yes, unflavored dental floss is the BEST for cutting cinnamon rolls. Why? Because it cuts from the inside to the center, rather than cutting straight down like a knife.

Because this dough is so soft, a knife has the potential to squish the rolls. Especially with the pecans in the filling, as these can drag down and tear the cinnamon rolls as you slice. If you don’t have floss as an option (thin sewing thread works well too), use a really sharp knife and gently saw back and forth. Don’t press straight down into the roll otherwise the cinnamon rolls will turn out misshapen.

For the floss, grab a piece about 10 inches long and pull it tight. Run it along the bottom of the rolls and toss the two ends of the floss over top of the roll, crossing them over each other. Pull the two ends tight to slice through the roll.

Now you’re left with perfectly shaped rolls that are ready to proof and bake.

HOW TO MAKE THESE CINNAMON ROLLS OVERNIGHT

The next step can go either way. If you want to bake these rolls the day of, cover your baking dish with a towel and let them rise for about an hour. If you’d prefer to bake these the next morning, follow these instructions:

After placing the rolls into the baking dish, cover the dish in plastic wrap and store in the refrigerator overnight. When you’re ready to bake them the next morning, let the rolls rest at room temperature for about 45 minutes (still covered).

The rolls may not puff up as much as they would if they were proofed the day of but that’s OK. They will still puff up when baked. Bake according to the original recipe and serve!

Alternatively, you can also freeze your cinnamon roll dough if you’d like to prepare this recipe a few days or weeks in advance.

HOW TO STORE BAKED CINNAMON ROLLS

These rolls are to be served when they’re fresh and warm. With any leftovers, cover the dish tightly in plastic wrap and store at room temperature for 2-3 days. You can also place a couple slices of bread in the baking dish with the rolls which will keep them from drying out.

For longer, cover the rolls and store in the refrigerator for 4-5 days. Although I find they dry out a bit in the fridge. To revive them, place a roll in a plate and spread a bit of butter on the sides. Warm for 20-30 seconds in the microwave and enjoy!

Make sure to tag me @butternutbakery on Instagram if you make these Maple Pecan Cinnamon Rolls. I love seeing my recipes come to life in YOUR kitchen! To pin this recipe and save it for later, you can use the button on the recipe card, the buttons above or below this post, or on any of the photos above. Happy baking!

Watch how to make these maple pecan cinnamon rolls:

OVERNIGHT CINNAMON ROLLS – After step 16, cover the rolls in plastic wrap and place in the refrigerator overnight. Before baking the next day, allow the rolls to rest at room temperature (covered) for about 45 minutes. They may not puff up but that’s OK. Follow the same baking instructions.