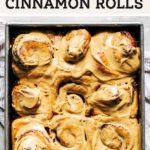 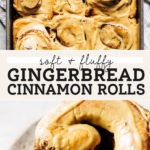 These gingerbread cinnamon rolls would make the perfect Christmas morning breakfast. You can choose to make them the day of, or chill them overnight and bake them fresh the next morning. They’re super soft and fluffy and full of that classic gingerbread flavor, not to mention the gingerbread cream cheese icing on top!

This post is sponsored by Fleischmann’s Yeast but all thoughts and opinions are my own. Thank you for supporting the brands that make Butternut Bakery possible!

What makes these gingerbread cinnamon rolls so good?

This recipe puts classic cinnamon rolls to shame, at least around the Holidays. They’re so so fluffy and yet so moist and gooey. With the classic gingerbread ingredients in the dough, filling, and icing, they are definitely not lacking in flavor.

You can also choose to let them rise and bake the same day, or pop them in the fridge overnight and bake the next morning. It’s a versatile recipe that’s surprisingly easy to make.

These cinnamon rolls are super fluffy and puff up nice and tall in the oven. Here’s how to get that yummy soft texture:

First, this recipe is best made using a stand mixer. It’s not absolutely necessary but it’s makes your life so much easier! You will need both the paddle attachment and the dough hook. I’ll leave instructions below on how to make this without a mixer as well.

One more note before we start: Make sure to spoon the flour into the measuring cup and level it off with a straight edge. This prevents you from using too much flour.

To make the dough without a stand mixer:

Use a whisk to combine the dry ingredients.

When pouring the butter and water, pour 1/3 of the mixture at a time and mix between each addition with a wooden spoon.

Continue mixing with a wooden spoon for the egg, vanilla, molasses, and the rest of the flour.

When you’ve added the last 1/2 cup of flour, really work the dough with the wooden spoon. It will be too sticky at this point to knead, so really mix it with the spoon for a couple minutes and then begin kneading by hand on a floured surface.

How to knead sticky dough

To prevent the dough from sticking to absolutely everything, make sure your surface is well floured before dumping the dough out on to it. Use about 1 tablespoon of flour.

Dust the top of the dough with an additional tablespoon of flour and begin kneading. It may stick a little to the surface but that’s to be expected. Just keep kneading and try not to get your hands too sticky. If they do, just add some flour to your hands.

After about a minute or two of kneading, the flour should be almost completely absorbed into the dough and it should be easy to form into a large ball. Press two fingers into the dough. If the dough springs back, it’s ready.

Leave the dough where it is and loosely cover in a towel or a sheet of plastic wrap. Allow the dough to rest for 10 minutes to relax the gluten strands for easy rolling. The dough should also puff up slightly thanks to the fast acting Fleischmann’s RapidRise® Yeast.

While the dough rests, make the delicious gingerbread cinnamon filling (yes, it’s as good as it sounds).

The filling consists of softened butter, brown sugar, cinnamon, ginger, and molasses. Mix all of these ingredients together to get a soft, spreadable gingerbread cinnamon filling. Set it aside.

After the 10 minutes is up, lightly flour underneath the dough and all around it. Begin rolling out the dough into a rectangular shape.

It will resist the rolling, so I like to pick it up at one end and let gravity stretch it out. I keep doing this on both ends of the dough until I’m close to the shape I need.

Switch back to the rolling pin and roll it out to a 16×12 inch rectangle. If it’s still giving you a hard time, use your hands to stretch and press it into place. I alternate between my hands and the rolling pin all throughout this process.

Spread an even layer of the filling using a small offset spatula or the back of a spoon. Leave a 1/2 border bare all the way around the dough.

Roll the dough up from the long end into a log (careful not to stretch the dough). Roll the dough onto the seam to prevent it from unraveling.

How to cut dough for cinnamon rolls

Once the dough is rolled, it’s time to slice these pretty gingerbread swirls.

The best and only way to slice cinnamon rolls is by using unflavored floss. It’s gentle and slices from the outside in, so the rolls don’t get smooshed like they would with a knife.

Pull the floss tight and flush against your work surface to push it underneath the log without it catching on the bottom. First, slice off the ends of the dough so you’re left with clean, blunt ends.

Then run the floss underneath the log all the way to the center. Make a slice right in the middle, then halve each of the two halves you just made. Now you have 4 medium pieces of the log.

Slice each of these into 3, so you’re left with 12 rolls total. Place these into a lightly buttered 9×13 baking dish.

Space them evenly to give them a bit of room to grow.

At this point you can choose to let them rise at room temperature for an hour before baking (they will double in size). OR wrap the baking pan in plastic wrap (to prevent the rolls from drying out), and place it in the fridge overnight.

How to make these cinnamon rolls overnight

If you choose the overnight route, make sure your pan is securely wrapped and immediately place the rolls in the fridge. Since we’re working with Fleischmann’s RapidRise® Yeast, they’ll start growing quickly if they aren’t chilled ASAP.

In the morning, take the rolls out of the fridge (keeping them covered), and let them sit at room temperature for about an hour.

They’ll grow a bit, but not as much as they would if you had baked them the day before. Nothing to be concerned about as they’ll still bake just fine!

So, if they don’t grow to completely fill the pan before popping the rolls in the oven, that’s totally ok. The heat from the oven will take care of the rest.

How do I know when the cinnamon rolls are done?

Whether you went the immediate or overnight route, they should bake and look the exact same either way. You’re looking for light golden brown edges with the very centers of each roll puffed up.

If the center rolls don’t grow as tall, that’s ok. They’ll be baked through, but will be a bit softer than the outside puffy rolls.

When do I add the gingerbread cream cheese icing?

It’s up to you! If you like really melty icing, smear it on when the rolls are still warm. If you like a thicker consistency to your icing (like the photos here), wait til the rolls have cooled for about 20 minutes. They’ll still be warm, but not steaming warm.

Can I reheat the rolls?

Yes! Place the rest of your rolls in the fridge, covered in plastic wrap or transferred to an air tight container. When you’re ready for a roll, pop it in the microwave for about 20-30 seconds and enjoy.

How long do the rolls last?

The rolls will keep for up to 3 days in the fridge. Since it’s such a fluffy and airy recipe, they will dry out fairly quickly because of how the air can flow through the rolls.

Troubleshooting: Why didn’t my cinnamon rolls rise? (before baked)

This could be due to two things:

For more delicious cinnamon roll recipes, check out my:

Make sure to tag me @butternutbakery on Instagram and comment below if you make these Gingerbread Cinnamon Rolls. To pin this recipe and save it for later, you can use the button on the recipe card, the buttons above or below this post, or on any of the photos above. Happy baking!

These gingerbread cinnamon rolls have that classic gingerbread flavor in the dough, in the filling, and in the cream cheese icing. They definitely aren’t lacking in flavor and have a delicious soft and fluffy texture.