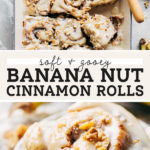 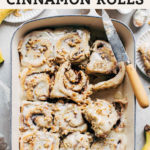 These banana bread cinnamon rolls have the best of both worlds! Sweet bananas are wrapped up in a soft and fluffy banana cinnamon roll and topped with maple cream cheese icing. They’re tender, sweet, and a fun treat to make for brunch. It’s also easy to make this recipe completely vegan with a few simple swaps!

This recipe is unique from other cinnamon roll recipes because mashed banana is mixed right in to the dough. It takes place of the egg as it helps hold these rolls together while also adding that sweet banana flavor. Here are a few tips to ensure your banana cinnamon rolls turn out just right:

Once the dough is finished, let it rest for 10 minutes before filling, rolling, and cutting. This allows the dough to rise, gives the dry ingredients a chance to fully absorb, the gluten strands to relax. After 10 minutes, the dough will have swelled just a bit and become much easier to roll out.

To make this a fast and simple recipe, I wanted to ensure the filling didn’t take up any extra time. For this step in the recipe, all of the mixing is done right on the surface of the dough so no extra bowls or utensils are needed.

But before you start, make sure the butter is at room temperature. This is important for 2 reasons. One, if the dough is too firm it will be very difficult to spread and create tears and possibly holes in the dough. Two, if it’s too thin or melted, it filling will slip and slide all around the surface of the dough and could squish out the sides when you cut the rolls.

So with the room temperature butter, place a few tablespoons all around the surface of the rolled dough. Spread it even with a spoon, leaving a 1/2 inch border around all 4 edges. This gap gives the cinnamon rolls a chance to seal up at the ends.

Sprinkle a layer of brown sugar on top and spread it even with your hand. Then add an even layer of cinnamon.

Now roll the dough from the longest end to create a giant log. When rolling, don’t think of pushing the rolls, instead focus on gently resting each layer on top of one another as you roll. If you apply too much pressure, you run the risk of the bananas sliding out. Let it rest on top of the seam and press the two ends in towards the center. This will help condense the log just a bit to undo any stretching that may have happened during the rolling.

HOW TO CUT CINNAMON ROLLS

Ditch the knife, it’s time to use dental floss on these rolls! Yes, unflavored dental floss is the BEST for cutting cinnamon rolls. Why? Because it cuts from the inside to the center, rather than cutting straight down like a knife.

Because this dough is so soft, a knife has the potential to squish the rolls and push out all of the filling. If you don’t have floss as an option (thin sewing thread works well too), use a really sharp knife and gently saw back and forth. Don’t press straight down into the roll otherwise the cinnamon rolls will turn out misshapen.

For the floss, grab a piece about 10 inches long and pull it tight. Run it along the bottom of the rolls and toss the two ends of the floss over top of the roll, crossing them over each other. Pull the to ends tight to slice through the roll.

Now you’re left with perfectly shaped rolls that are ready to proof and bake.

SIGNS YOUR BAKING PAN IS TOO SMALL

If your baking pan is too small, your rolls will press up against each other when baked. If this happened, it will be difficult for the very center rolls to heat all the way through. When placing the rolls in your baking pan, make sure each roll is just barely touching, just like the image above. If they look a bit more compact, try baking the rolls in two separate pans. Remove 2-3 rolls from your largest pan and bake the extras in a loaf pan instead.

Can the dough be made ahead of time?

If you’d prefer to prep the dough ahead of time and bake the rolls the next morning, follow these instructions:

After placing the rolls into the baking dish, cover the dish in plastic wrap and store in the refrigerator overnight. When you’re ready to bake them the next morning, let the rolls rest at room temperature for about 45 minutes (still covered).

The rolls may not puff up as much as they would if they were proofed the day of but that’s OK. They will still puff up when baked. Bake according to the original recipe and serve!

Since the banana replaces the egg in the cinnamon roll dough, it’s very easy to make this recipe completely vegan with a few simple swaps. The only other non-vegan ingredients are the cream cheese and butter. Simply swap them out with your favorite vegan alternatives and you’re good to go!

HOW TO STORE BANANA CINNAMON ROLLS

These rolls are to be served when they’re fresh and warm. With any leftovers, cover the dish tightly in plastic wrap and store at room temperature for 1-2 days. You can also place a couple slices of bread in the baking dish with the rolls which will keep them from drying out.

For longer, cover the rolls and store in the refrigerator for 4-5 days. To warm back up, place a roll in a plate and spread a bit of butter on the sides. Warm for 20-30 seconds in the microwave and enjoy!

Make sure to tag me @butternutbakery on Instagram and comment below if you make these Banana Bread Cinnamon Rolls. To pin this recipe and save it for later, you can use the button on the recipe card or on any of the photos above. Happy baking!

The best of both worlds – the sweet and tender flavor of banana bread with the soft and fluffy texture of cinnamon rolls. Bananas and mashed into the dough and added in slices in the filling.

OVERNIGHT CINNAMON ROLLS – After step 16, cover the rolls in plastic wrap and place in the refrigerator overnight. Before baking the next day, allow the rolls to rest at room temperature (covered) for about 45 minutes. They may not puff up but that’s OK. Follow the same baking instructions. Also note that the banana slices may brown a bit which is normal.