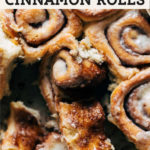 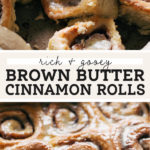 If you’re looking to try a cinnamon roll recipe that’s a bit different than the classic, these brown butter cinnamon rolls are for you! They’re baked with brown butter in the dough, in the filling, and are then topped with a brown butter cream cheese icing. Thanks to all that brown butter, the flavor is a bit richer and more mature than regular cinnamon rolls, but the texture is still soft and fluffy just like all rolls should be.

What is brown butter?

It’s magical. Seriously, add brown butter to any recipe and it makes it 10x better!

Brown butter is melted butter that has been cooked down to release its milk solids. Once those have toasted at the bottom of the pan, you’ll see the butter transform into an amber color and release a delicious nutty aroma. It basically smells like heaven.

It’s along the same lines as roasting nuts in the oven, to release a deeper flavor.

It adds so much depth of flavor to any dish, either sweet or savory. The brown butter in this recipe pairs perfectly with the warm cinnamon and brown sugar. It elevates this delicious cinnamon roll recipe into a really special treat.

How to make brown butter

This is a foolproof recipe and the rolls turn out perfect every single time (trust me, I’ve made these MANY times). But if you’re brand new to working with yeast, or it’s your first time making cinnamon rolls from scratch, here are a few times to follow:

Once the dough is finished, let it rest for 10 minutes before filling, rolling, and cutting. This allows the dough to rise, gives the dry ingredients a chance to fully absorb, and lets the gluten strands to relax. After 10 minutes, the dough will nearly double in size and become much easier to roll out.

I need my cinnamon rolls to be soft, fluffy, and squishy, but NOT dry. These rolls are all that and more! The texture is like a pillow, but each bite just melts in your mouth and is bursting with flavor.

The trick to getting really fluffy cinnamon rolls is to use double the amount of yeast. This gives the rolls so much lift, with tiny little air pockets all throughout the dough.

Once the dough has been rolled and cut, allow the cinnamon rolls to proof for about 45 minutes. This is when you’ll see the magic of the double yeast, as the rolls will puff up and fill the entire baking dish.

Since this dough is soft and squishy, cutting the rolls with a knife can lead to misshapen rolls. The weight of the knife can smash the rolls down or push out the filling.

To prevent this from happening, I always use unflavored floss to cut my cinnamon roll dough. Once the dough has been rolled up into a log, run a string of floss underneath the log. Then pull up the two ends of the string and cross them over each other. Pull through to slice right into the roll.

This works really well because it applies even pressure from the outside in, giving you a perfectly shaped cinnamon roll.

The best time of year to make these cinnamon rolls is in the fall and winter. It’s such a warm and cozy dish and are best served when they’re fresh from the oven.

But because of that, my kitchen is often very cold when I’m making these rolls. If it’s too cold, the rolls will have a hard time puffing up. So instead of allowing them to proof at room temp, I instead proof them in the oven.

First, preheat your oven to the lowest possible heat setting. Once it’s preheated, turn the oven off and place the rolls inside with the door closed. This creates a warm environment for the yeast to thrive, allowing the rolls to puff up and double in size.

Why didn’t my cinnamon rolls double in size?

If your rolls didn’t puff up and fill the baking dish, it could be a few reasons:

This brown butter icing is so rich and so delicious. It’s almost like a cross between a glaze and an icing. It’s not too sweet and it just melts into these rolls, but it also isn’t super thin and runny like a glaze would be. It’s just the perfect topping to these rolls because they sink right into all of the swirls, making these cinnamon rolls extra soft and gooey.

But before you make it, it’s very important that both the cream cheese and butter are at room temperature. The very first step in this recipe is to make the brown butter, so by the time you’re ready to make the icing the brown butter should be solidified but soft. You don’t want to use liquified butter in this icing because it could turn clumpy.

Same goes for the cream cheese. If it’s too cold, the icing won’t have that rich and smooth consistency. But if the two are at the right temperature, this icing can be made by hand. First mash the butter and cream cheese together with a fork, then mix in the powdered sugar, vanilla, and milk.

But the time you’ve mixed in the milk, you should be able to switch to a whisk to fully smooth out the icing. Then it’s ready to spread on the rolls!

When is the best time to add icing to cinnamon rolls

Right when they’re fresh from the oven. This icing is mostly butter, so when that solid brown butter hits these warm rolls, it slowly begins to melt right into the swirls and cracks.

Spreading it on when the rolls are warm gives the icing to soak in, creating an extra gooey and soft texture.

Definitely serve when they’re warm! This is when they’re at their prime, as the texture is super soft, tender, melty, and just all around perfect.

Can I make these cinnamon rolls overnight?

Yes. Once you’ve formed the rolls and placed them in the baking dish, cover the dish in plastic wrap and store in the refrigerator overnight. When you’re ready to bake, allow the rolls to rest at room temperature before placing in the oven.

How to store leftover cinnamon rolls

Cover the rolls tightly in plastic wrap. They can be stored at room temperature for 2 days or in the refrigerator for up to 6 days.

Since these are best served warm, any leftovers should be reheated before eating. Simply place the roll on a heat-safe dish and microwave for about 10 seconds. It doesn’t take much!

Make sure to tag me @butternutbakery on Instagram if you make these Brown Butter Cinnamon Rolls. I love seeing my recipes come to life in YOUR kitchen! To pin this recipe and save it for later, you can use the button on the recipe card, the buttons above or below this post, or on any of the photos above. Happy baking!

These warm and cozy brown butter cinnamon rolls are baked with brown butter in the dough, in the filling, and in the cream cheese icing. They’re the perfect rich, soft, and fluffy rolls that are so easy to make!

OVERNIGHT ROLLS – You can make these a day ahead and allow the rolls to chill overnight to bake the next morning. Once the rolls have been placed in the baking pan, cover and chill overnight. Then let the rolls rest at room temperature for 30 minutes before baking. They may not double in size before baking but that’s OK. They should puff up in the oven.