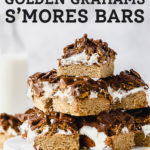 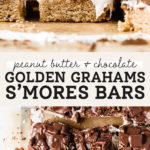 These Golden Grahams S’mores Bars take s’mores to a whole other level! They have a soft graham cracker blondie on the bottom, a very simple marshmallow buttercream in the middle, and a crunchy Golden Grahams peanut butter and chocolate layer on top. I mean ARE YOU KIDDING ME? This might just be one of the best s’mores bar recipes out there.

What I love about this recipe

The graham cracker blondies in this s’mores bar recipe could honestly stand alone. Smear your favorite buttercream flavor on top and it’s good to go.

But I can’t just leave it at that for these Golden Graham S’mores Bars! The base of the recipe is just like any other blondie; sugar, butter, eggs, and flour.

I subbed out some of the flour with crushed up graham crackers to give it that classic s’mores flavor. It made the blondies a little grittier which I like.

In order to get that dense texture, I slammed the pan on the counter a couple times after it was done baking. It knocks out the air and gives you an even base for the other layers of these s’mores bars.

What makes these s’mores bars so good?

What I love most about this recipe is all of the textures its got goin’ on. The base is a super simple graham cracker blondie that’s dense, chewy, but also soft.

The center is a smooth marshmallow buttercream made up of just TWO ingredients! And it might look messy but trust me, it’s much easier to manage than a layer of just marshmallows.

On top is a layer of chocolate peanut butter Golden Grahams. It gives these bars a yummy crunch and even more graham cracker flavor.

So easy it almost feels like cheating! When I was testing this recipe, I was struggling with the marshmallow layer. Baking with marshmallows is tricky because they’re delicious at first but they’ll harden as they dry. Mine would harden and completely disappear into the other layers.

At first, I thought a layer of marshmallow fluff would work in it’s own. Unfortunately the weight of the Golden Graham layer made these bars an absolute mess.

I was wandering around the grocery store trying to think of a solution when I came across the section full of frosting. With an extra tub of marshmallow fluff in my hand, I knew exactly what to do!

As if the marshmallow layer wasn’t easy enough, this Golden Graham layer is just as simple. You start by melting down the butter, chocolate, and peanut butter.

Once melted, mix in your Golden Grahams and gently spread it overtop the marshmallow layer.

Instead of pouring it on top, use a spoon to place dollops all throughout then carefully spread them out. This is so we don’t disrupt the marshmallow layer underneath.

For even more delicious s’mores desserts:

Make sure to tag me @butternutbakery on Instagram if you make these Golden Grahams S’mores Bars. I love seeing my recipes come to life in YOUR kitchen! To pin this recipe and save it for later, you can use the button on the recipe card, the buttons above or below this post, or on any of the photos above. Happy baking!

These Golden Grahams S’mores Bars have everything – they’re crunchy, melty, soft, chewy, and gooey. The base is a soft graham cracker blondie with layers of marshmallow buttercream and peanut butter chocolate Golden Grahams on top!