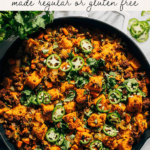 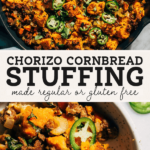 This chorizo cornbread stuffing is a unique twist on a classic Holiday dish. Crispy chunks of cornbread and baked with spicy chorizo, tender veggies, jalapeños, and cilantro. It’s super flavorful and so easy to make! It can also be made using regular or gluten free cornbread.

If you’re looking to spice up your Thanksgiving menu, look no further than this cornbread stuffing recipe. It’s made with chorizo which adds a major boost of flavor to this dish. Here’s what you can expect with every bite:

Cornbread stuffing can be a bit tricky since cornbread is much. more tender than bread. To ensure your cornbread chunks stay in tact and down break down within the stuffing, here is what you can do:

The best baking dish for stuffing

For this recipe, I baked it in a giant 12″ cast iron skillet because I love the look of the square cornbread bits inside a round pan. Of course, not everyone has a 12″ cast iron skillet, so a 9×13 baking dish also works just fine! Just make sure to butter or spray the dish to prevent the stuffing from sticking.

To get the crispy golden crust on top, the cornbread is broiled for just a few minutes right at the end of its bake time.

But, broiling can be tricky as the stuffing can go from golden to burnt very fast. To prevent burning, make sure the stuffing is on the middle rack of the oven. Then, broil for just 3 minutes. If it’s still not as golden as you like, broil in 30 second increments until it’s ready.

For more savory recipes, check out my:

Make sure to tag me @butternutbakery on Instagram and leave a review below if you make this chorizo cornbread stuffing. To pin this recipe and save it for later, you can use the button on the recipe card, the buttons above or below this post, or on any of the photos above. Happy baking!

This chorizo cornbread stuffing is made with crispy chunks of cornbread, spicy chorizo, jalapeños, and a sprinkle of cilantro. It’s incredibly flavorful with a southwestern spin on this classic dish. It can also be made with regular or gluten free cornbread!

*CORNBREAD – You can use cornbread mix that is either regular or gluten free. Bake it in an 8×8 square baking dish (if the instructions allow) and let it cool completely. Once cooled, chop half of the cornbread into cubes. This should give you about 8 cups. Leave the cornbread chunks out on the counter overnight to dry out. If you don’t use dry cornbread, the stuffing turns out a bit more soft than I’d like.