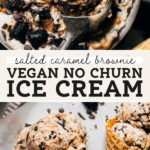 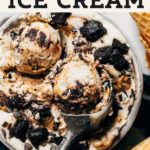 This vegan no churn ice cream is so creamy that you would never even know it’s dairy free! Swirled with salted date caramel and almond flour brownie bits, this ice cream is just as rich and indulgent as any dairy version. It does not require an ice cream machine and is not made with bananas. Instead, this coconut-based ice cream gets all that delicious texture from a very unexpected ingredient!

What goes into this vegan no churn ice cream?

What I love about this recipe is that once you nail the vegan ice cream base, you can pretty much put anything you want in here! For my version, I’ve included bits of chocolate, brownie, and salted date caramel.

True homemade salted caramel is made with cream and butter, which obviously will not fly with this recipe. So instead, I opted for a super simple date caramel recipe that tastes just as rich and sweet. It’s made up of dates, almond butter, water, salt, and a bit of plant milk.

Dates have a natural caramel-like flavor, so they add tons of caramelized sweetness to this recipe. Almond butter helps add richness, while the water and plant milk thin it out into a caramel consistency. It’s then swirled twice into the ice cream – once into the entirety of the batter, and another into each of the three layers as the ice cream is poured into its dish. So you can that caramel flavor all throughout, with additional globs of caramel that you’ll be digging for with each bite.

Since we’re making homemade caramel AND vegan ice cream batter, I figured it was OK to take a shortcut with the brownies. Especially because box mix brownies just never fail. To make this recipe gluten free and vegan, I used my favorite almond flour brownie mix by Simple Mills (not sponsored, I just really like this mix). To replace the eggs, I used two flax eggs which is just 2 tablespoons of ground flaxseed mixed with 6 tablespoons of water. Mix the two together and let it rest for 10 minutes to thicken and gel before use.

After the brownies have baked and cooled, just chop them up into tiny bite-sized pieces (see picture below) and keep them in the refrigerator up until they’re needed.

Another perk to this recipe is that you only need about half of the brownies that 1 box makes. So you get extra brownie snacks while you wait for the ice cream to freeze overnight. It’s a win win.

How to make ultra creamy vegan no churn ice cream

I have to say, this was an unexpectedly tricky recipe. I assumed it would be easy to make a couple swaps to a traditional no churn ice cream recipe and it would turn out perfect. Oh, was I wrong. It took quite a few tests, but the end result is well worth the trouble because of how deliciously creamy it is. I actually prefer it to regular ice cream!

So what’s the secret? Here’s what goes into this PERFECT dairy free ice cream:

What to expect when making dairy free no churn ice cream

Since coconut cream makes up a major component of the ice cream batter, the consistency of the unfrozen batter can vary. Coconut cream can either be thick and creamy or somewhat thin, like pudding. I usually end up with more pudding-like coconut cream which is why my batter was more on the thin side. So if your batter turns out very liquid, it’s completely normal. But to ensure it’s not too far gone, here’s what you need to know:

What is the best vegan chocolate to use in this recipe?

The other component of this ice cream not previously mentioned is chopped chocolate. I love using 100% raw cacao as its slightly bitter flavor helps balance out the sweetness of everything else in this ice cream. I use Trader Joe’s Organic Completely Cacao Chips, but you can use any of your favorite vegan dark chocolate that you prefer!

Since the ice cream base is simply vanilla, you can add in any flavors you like! Here are a few I recommend:

Feel free to add in whatever you like! See my archive of vegan dessert recipes to gather even more inspiration.

For more vegan dessert recipes, check out my:

Make sure to tag me @butternutbakery on Instagram and comment below if you make this salted caramel brownie vegan no churn ice cream. To pin this recipe and save it for later, you can use the button on the recipe card or on any of the photos above. Happy baking!

This vegan no churn ice cream is SO creamy and swirled with salted date caramel and almond flour brownie bits.

BROWNIE MIX – I recommend using an almond flour brownie mix (like this one) but sub the eggs with flax eggs (1 flax egg = 1 egg; 1 flax egg = 1 tbsp ground flaxseed + 3 tbsp water; stir the two together and allow them to gel for 10 minutes before use). You’ll also only need about half of the batch, so the rest can be for snacking! Alternatively, you could make my raw vegan brownies which can be found in the recipe for my healthy cookie dough bars.

COCONUT CREAM – Coconut cream can be taken from a can of full fat coconut milk. In order to access it, the can must be chilled overnight. When chilled the cream rises to the top of the can and the water sinks to the bottom. This is why it’s important to not shake the can before chilling, making it more difficult for the two to separate. Once chilled, open the can from the bottom and pour out the liquid. Then scoop out the cream. Alternatively, you can purchase cans of coconut cream but those will also need to be chilled overnight. Also make sure to buy coconut milk or cream that has guar gum as an ingredient as this helps thicken the cream.

STORAGE – The ice cream will keep in the freezer for about 2 months, as long is it stays covered.