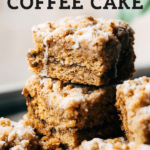 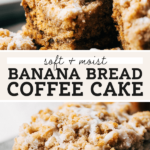 This banana coffee cake is absolute bliss. Not only is moist like banana bread, but it’s also swirled with cinnamon sugar and topped with a sweet and crumble crumble. If you love coffee cake, you definitely need to try this recipe!

What makes this banana coffee cake SO good?

I made this when I had a friend visiting from out of town and we probably had two to three pieces a day for the entire weekend. We could not be stopped. It was out of hand. We have no regrets.

To break this down, you’ve got a super moist and dense cinnamon banana coffee cake with a sweet and crunchy brown sugar crumble AND an icing drizzle. Not to mention it’s insanely easy to make. Here’s what to expect from this banana coffee cake recipe:

There are quite a few components to this banana crumb cake, but they’re all very easy to make! Here are my top tips to ensure your banana cake turns out just right:

How to bake banana crumb cake

This recipe took SO much trial and error, mainly because I wanted a really moist banana cake but it also needed to be solid enough to hold up the weight of the crumble.

The trick is to bake the coffee cake low and slow. It bakes at 325F for about 40-45 minutes which is nearly double the typical bake time for coffee cake.

It’s ready when the crumble is a light golden brown and a toothpick in the center comes out clean. The surface should also be evenly puffed.

When to serve banana coffee cake

Once the cake has baked, allow it to cool in the pan for about 30-40 minutes. It’s best served when its just slightly warm.

It’s also best to drizzle with the icing at this point because it won’t melt and disappear into the crumble. Once cooled, lift the cake out of the pan using the parchment paper over hang. Then drizzle with icing, slice, and serve!

For more BEST EVER banana recipes, check out my:

Make sure to tag me @butternutbakery on Instagram if you make this banana coffee cake. I love seeing my recipes come to life in YOUR kitchen! To pin this recipe and save it for later, you can use the button on the recipe card, the buttons above or below this post, or on any of the photos above. Happy baking!