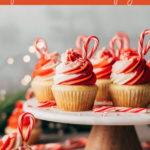 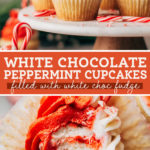 Spread some holiday cheer with these pretty white chocolate peppermint cupcakes! A moist and sweet vanilla peppermint cake is filled with soft white chocolate fudge and topped with candy cane swirled buttercream. They’re the perfect balance of sweet and rich but light and bright. The recipe is also naturally eggless which makes the cakes extra moist!

I found the secret to moist but delicate cupcakes is to omit the eggs. It adds a lightness to the texture and you no longer have to worry about any eggy flavor sneaking in to your cakes. This cake is also oil-based, making it extra moist! Here are a few tips to make sure your cakes turn out just right:

How to pipe two-tone buttercream

The real star of the show is the candy cane swirled frosting on top. But if you’ve never piped on two-toned frosting, don’t worry because it’s very easy! There are also a couple ways you can do it:

Option 1: Plastic Wrap – I like this option because it’s not as messy and ensures the two frosting sit side-by-side inside the piping bag. Although the only downside is that sometimes they can be too large for the piping bag itself. So if you know you’ll be using a large piping bag to frosting these cupcakes, I recommend this method. Once the buttercream is split in half and dyed, spread the buttercream on two separate sheets of plastic wrap. One red, one white. Wrap up the plastic wrap and twist the ends like a sausage (see photo below). Then, slide the two logs of buttercream side-by-side into a piping bag fitted with a large piping tip. Pull the two twisted ends of plastic wrap through the piping tip and snip it off. Now the two frostings are side-by-side and ready to pipe.

What to look for when making the white chocolate filling

It’s VERY important that you do not pour the white chocolate into the cupcakes when it is in liquid form. It will seep into all the air pockets and eventually, the center of the cupcake will become hollow and void of any filling.

Instead, place the mixture into the refrigerator in a wide and shallow dish. Chilling it in this type of container will speed up the thickening process. As the white chocolate cools, it will thicken and turn more white and opaque.

It’s ready to use when it has transformed into a spreadable and soft fudge-like consistency.

To fill the cupcakes, hollow out the center with a cupcake corer or a pairing knife. Just make a small hole that reaches about 2/3 of the way into the cupcake. Then spoon the white chocolate fudge into the center, filling it all the way to the top.

Now all that’s left to do is to pipe on the buttercream to hide the open top.

For my cupcakes, I sprinkled the tops with crushed candy canes and added a mini candy candy can to garnish.

How to store cupcakes

If you are making these a day in advance, I recommend leaving off the candy cane decorations until the day of serving. If left on the cupcakes too long, they could melt into the buttercream.

Otherwise, store the cupcakes in an air tight container in the refrigerator. They should keep for up to 5 days. And since they’re tall cupcakes, I recommend storing them in a tall cake container.

How to make these peppermint cupcakes vegan

Since the cake itself is naturally vegan (when using plant milk), the rest of the recipe is very easy to make completely vegan.

For the white chocolate, use cacao butter instead of white chocolate and replace the cream with 3 tbsp oil. Melt the two together and then chill to thicken.

For the buttercream, just replace the butter with any plant-based butter and use plant milk.

For more Holiday cake recipes, check out my:

Make sure to tag me @butternutbakery on Instagram and comment below if you make these White Chocolate Peppermint Cupcakes. To pin this recipe and save it for later, you can use the button on the recipe card or on any of the photos above. Happy baking!