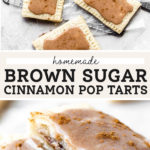 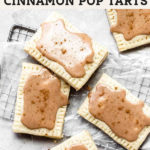 Get ready to feel nostalgic with these homemade brown sugar cinnamon pop tarts! This was by far my favorite pop tart flavor growing up so naturally, I had to make them from scratch. If you’re a little intimidated by making homemade pop tarts, not to worry! I’ve included step-by-step photos with in depth instructions to help you perfect this recipe.

This post is sponsored by Bob’s Red Mill but all thoughts and opinions are my own. Thank you for supporting the brands that make Butternut Bakery possible!

The pastry portion of this pop tart recipe is made just like pie dough. You start with all of the dry ingredients in a large bowl, cut in the chilled fats, and hydrate with water.

For this recipe you will need:

In a bowl, whisk together the flour, sugar, and salt. For recipes like these where flour is a major ingredient, I prefer to use Bob’s Red Mill Organic All Purpose Flour. It has the perfect texture because it’s finely milled organic wheat. Not only that, but it’s completely unbleached and unenriched to create a really high quality flour that’s perfect for baking delicious desserts!

The next step is to drop in the chilled butter and vegetable shortening. It’s VERY important that both are cold because we still want some chunks of fat to remain when the dough is mixed together.

These butter chunks are what help create a flaky pastry. When baked, water begins to escape from the butter and evaporate. What’s left behind are tiny little air pockets between the gluten strands. This is what gives you that delicate flaky texture.

The shortening also plays an important role in the pliability of the dough. Since we’ll be rolling, cutting, and shaping the dough, we definitely don’t want it to fall apart on us. Shortening allows the dough to hold its shape before and during baking. And since shortening lacks flavor, pairing it with butter gives the dough it’s richness.

To work the two into the dry ingredients, you can either use a pastry cutter or two forks. You want to “cut” the butter and shortening into the flour mixture until you’re left with a lumpy sand-like texture (see photo below). This takes a little bit of elbow grease but is so worth it for delicious homemade pop tarts!

Switch to a rubber spatula and add in 2 tablespoons of ice water. Dip into a glass of water filled with ice cubes because we want the water to be REALLY cold.

Mix that into the dough and then add 2 more tablespoons. By the end, you want the dough to look like the picture below, formed into one mass that can hold its shape but also easily break apart. You’ll know it’s ready when the dough sticks to the spatula. If you aren’t quite there yet, add in one more tablespoon.

Dump the dough out onto a lightly floured surface and form into a rounded rectangle shape – it doesn’t have to be perfect.

Slice down the middle and wrap each half in plastic wrap. Refrigerate for 2 hours or overnight and make sure you place them side by side, not on top of each other. Stacking them will prevent the two halves from chilling at the same rate.

HOW TO SHAPE HOMEMADE POP TARTS

Once the dough has completely chilled, take one half out of the fridge and let it rest at room temperature for about 10 minutes. We need it to soften just a bit so it doesn’t crack apart when rolling it out.

Roll the dough out onto a floured surface to about ⅛ an inch thick and try your best to roll it into a 9 x 13 inch rectangle.

Using a pizza cutter, slice 6 rectangles that are all 3 x 4 inches (see picture below). Place on a tray lined with wax paper and pop them back in the fridge. Repeat with the other half of dough.

By this point, you should have 12 rectangles all sitting in the fridge. Preheat the oven to 350F and then start on the brown sugar cinnamon filling.

We’re in the home stretch! Now we just have to make the filling and seal up these homemade pop tarts.

In a small bowl, mix together all of the filling ingredients:

The butter helps create that ooey gooey center and the maple syrup prevents the filling from getting too gritty. Plus it adds delicious flavor!

Once that’s well combined, take 6 pastry rectangles out of the fridge and transfer to a large baking sheet lined with parchment paper. Add 1 tablespoon to the center of each rectangle and spread it even, leaving a small lip around the edge (see picture below). This gap is needed for sealing the pop tarts.

Take the remaining 6 rectangles out of the fridge and use a toothpick to poke 6-7 holes concentrated in the center of each rectangle.

Next, dab the edges of the filled rectangles (where you left that gap around the edges) with some water. This is the glue that holds the two halves of the pop tarts together.

Take the rectangles that you just poked holes into and place on top of the filled pastries.

Seal the deal by crimping the edges with a fork and they are ready to bake!

But make sure that the pop tarts are still somewhat chilled. If they’ve been sitting out a little too long during this process, pop them back in the fridge for around 10 minutes before baking.

It’s surprisingly easy to over-bake these homemade pop tarts. Mainly because they hardly change color but there are a few signs you can look for to ensure they’re done.

First and foremost, bake for 25 minutes and add on one minute at a time until they’re done. This will ensure you don’t toast the edges too much.

Let the pop tarts rest on the baking sheet for about 10 minutes. They’ll still be pretty soft at this point, so allowing them to cool here first makes it much easier to transfer them over to a cooling rack.

Did I mention that these pop tarts have a delicious cinnamon icing on top? Because they do! And it’s very quick and easy to whip up.

All you have to do is mix together some powdered sugar, cinnamon, vanilla, and a bit of milk.

The trick is to get just the right consistency. You want the icing to run off your spoon in a steady stream but not too thin to where it completely disappears back into the bowl.

If it’s still too thin, add 1 tablespoon of powdered sugar. If it’s too thick, add about 1 teaspoon of milk.

Spoon the icing on to your cooled pop tarts. Work slow here and use just a smidge less than you think you need to. Dollop some icing in the center and slowly work it out to the edges. It will naturally begin to fall off the sides.

Sprinkle with some extra cinnamon on top and you’re done!

HOW TO STORE HOMEMADE POP TARTS

These pop tarts are best enjoyed slightly warm since that’s when the filling is nice and soft. If by some off chance they don’t get devoured all at once, keep them in an air-tight container at room temperature for up to 5 days.

You can either eat them as is, pop them in the microwave, or toast them in a toaster oven. Unfortunately the frosting doesn’t set like original pop tarts so they’d make a huge mess in an actual toaster! But they just need a few seconds of heating up and they’re good to go.

If you have any other questions about the baking process or what to do with them after, leave a comment below!

For more cinnamon recipes, check out my:

Make sure to tag me @butternutbakery on Instagram and comment below if you make these Homemade Brown Sugar Cinnamon Pop Tarts. To pin this recipe and save it for later, you can use the button on the recipe card, the buttons above or below this post, or on any of the photos above. Happy baking!

Homemade brown sugar cinnamon pop tarts with a flaky pastry, buttery cinnamon sugar filling, and a sweet cinnamon icing. They’re like the grown up version of a childhood classic!