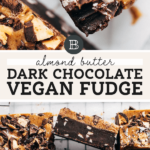 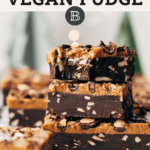 This vegan fudge is so rich and creamy that you would never even know it’s dairy free! Delicious vegan dark chocolate fudge is mixed with crunchy toasted almonds and layered with an almond butter topping. It’s not overly sweet and has the perfect balance of crunch, salt, and fudginess.

How to make vegan fudge

Sweetened condensed coconut milk is basically identical to the regular kind as it has the same color, sweetness, and consistency. It also doesn’t have a strong coconut flavor, so this fudge does not taste any bit like coconut in case you were wondering!

All ingredients are melted down in a bain-marie, which is just a fancy term for melting over hot water. The contents are combined in a heat-safe bowl and placed over a pot of simmering water. The heat below will gradually melt the chocolate, giving it a super rich and fudgy texture.

Once it’s melted, vanilla and toasted almonds are added for both flavor and a bit of crunch. Spread the fudge into a baking pan so that it’s ready for the almond butter topping!

The almond butter topping is even easier to make than the dark chocolate fudge. Simply mix together melted coconut oil, natural almond butter, and maple syrup and pour it over the fudge layer. Then it’s frozen until firm.

To add even more texture, I like to top the fudge with dark chocolate covered almonds. They aren’t 100% necessary, especially if you can’t get your hands on a vegan option, but I do still recommend adding a bit of something on top.

This could be more chopped chocolate, chopped almonds, or anything with some crunch.

When the fudge is firm and set, it will be VERY hard to slice. Because of this, it’s best to thaw the fudge for about 20 minutes at room temperature. This will help loosen it up just enough to slice, but not enough to where it’s completely melted.

Use a very large and sharp knife for cutting and try not to drag the knife along the fudge. Make one downward motion and lift straight up to cut one large slice across the entire hunk of fudge.

What can I use instead of almond butter?

If you aren’t a fan of almonds, it’s easy to substitute any nut or seed butter. Just make sure it’s natural with no added ingredients. Natural is much stronger in flavor and the more dripping consistency will yield a much creamier fudge.

Can I substitute with regular sweetened condensed milk?

If you don’t need this recipe to be vegan, you can definitely sub in regular sweetened condensed milk and non-vegan dark chocolate. It should provide the same exact result, just with dairy instead.

How to store vegan fudge

After the fudge is sliced, store it in the refrigerator (not the freezer). In the refrigerator, the fudge will remain firm but not rock hard. It can be eaten straight from the fridge, or thawed at room temperature for about 45 minutes for fudgier consistency.

Just note that the almond butter topping softens quick faster than the dark chocolate fudge, so I don’t recommend leaving the fudge out at room temp for more than an hour.

How long does vegan fudge keep?

I had loads of leftover fudge in my refrigerator that I was snacking on for weeks. This fudge holds up really well in the refrigerator, as long as it’s stored in an air tight container. It will keep for up to 12 days.

Alternatively, it can be stored in the freezer where it will keep for a couple months. Then just thaw in the fridge overnight when you’re ready for some fresh fudge!

For more no bake vegan dessert recipes, check out my:

Make sure to tag me @butternutbakery on Instagram and comment below if you make these vegan caramel pecan cheesecake bars. To pin this recipe and save it for later, you can use the button on the recipe card or on any of the photos above. Happy baking!

This super creamy vegan fudge is made with a dark chocolate base with crunchy toasted almonds and a smooth almond butter topping. It’s so easy to make and tastes so rich that you would never even know it’s dairy free!

TOASTED ALMONDS – Spread the almonds on a baking sheet and bake at 350F for about 7 minutes.

STORAGE – Store the fudge in the refrigerator in an air tight container. It will keep for a good 10-12 days.